When Twin Peaks debuted in 1990 on ABC, it was truly one-of-a-kind. Now, however, it’s going to be two-of-a-kind: Showtime has announced that they’ll be bringing back Twin Peaks for nine new episodes in 2016, with original creative team David Lynch and Mark Frost.

Still, in at least one way, the original run of the groundbreaking show will remain unique.

As TIME’s James Poniewozik pointed out Monday in explaining why the reboot news should be exciting rather than anxiety-provoking, “TV doesn’t need Twin Peaks anymore.” These days, cable TV — especially premium networks like Showtime — is full of weird, ambitious, artistic fare. It’s cool, but not all that crazy, to imagine that Showtime might bring back Twin Peaks. On the other hand, the show’s original debut was not just cool but also a major break with the rest of what was going on with television. Remember, Twin Peaks was on network primetime. Its direct time-slot competition was Cheers.

A Twin Peaks on Showtime won’t necessarily be better or worse than one on ABC — we’ll have to wait till 2016 to find out — but it can’t be as daring an idea.

Read Richard Zoglin’s original 1990 story about Twin Peaks, free of charge, here in TIME’s archives: Like Nothing on Earth 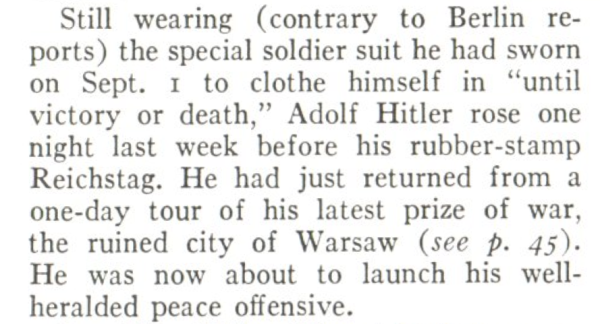 75 Years Ago: Hitler's Phony Plea for Peace
Next Up: Editor's Pick