This Texas Judge Is Fighting Fear and Ebola in Dallas

Dallas County Judge Clay Jenkins speaks to the media during a press conference on the status of Ebola patient Thomas Eric Duncan in Dallas, on Oct. 2, 2014.
Larry W. Smith—EPA
By Denver Nicks

Dallas County Judge Clay Jenkins is the first local elected official in the world to oversee the emergency response to a case of Ebola diagnosed outside of Africa. From the moment he took charge of coordinating the Dallas response, after a man visiting from Liberia tested positive for the disease, he’s found himself with responsibilities he never anticipated. He made a point of visiting the home of the infected man without protective clothing, took the responsibility for driving his quarantined family to their new home, and has been doing what he can to coordinate the state and federal response, while keeping his voters calm.

None of that means he had to miss this week’s Cowboys game. During a moment of relative calm away from the Emergency Command Center that hums with activity from 7 in the morning to around 10 at night, TIME caught up with Jenkins in his downtown office Sunday at the old Texas School Book Depository, across the street from Dealey Plaza and the grassy knoll. He was wearing a black shirt with “Homeland Security” emblazoned on it, meeting with staff and catching the end of the NFL game between the Dallas Cowboys and the Houston Texans. They were tied 17-17. I sat with my back to the TV so Jenkins could watch the game as we spoke about the moment on Tuesday September 30 that he heard Ebola might be in Dallas.

“We’ve got a hospital with 10,000 employees, I’ve got a county with 6,000 employees and I’m the highest elected official in that county, so things are happening all the time and that’s one data point that was happening,” he said. “I wasn’t envisioning that an instant command structure would be requested by our federal and state partners and that I’d be all that involved in that, at that point.”

Judges in Texas are the highest administrative officials in each county, with extraordinary powers that are a vestige of the Old West when a rural judge could make a claim as broad as “I am the law” without being too far off the mark. In Dallas today, the County Judge has two main responsibilities: get truant children back into school and, in the event of a disaster, lead the county’s response as the Director of Homeland Security and Emergency Preparedness.

A Democrat first elected to office in 2010, Jenkins cut his teeth in emergency response with an outbreak of West Nile virus in in 2012. Earlier this year he stirred up controversy by offering Dallas County facilities to house undocumented immigrant children flooding across the U.S.-Mexico border. He’s up for re-election in just a few weeks.

By Wednesday afternoon, after Ebola test results came back positive and following a series of meetings between officials from Texas, the Centers for Disease Control and Prevention and the White House, Jenkins was firmly in charge. That night he and others began sorting through the immediate challenges ahead: getting the infected man Thomas Eric Duncan’s potentially-toxic belongings out of the North Dallas apartment where he’d been staying, identifying and monitoring every person with whom Duncan may have come in contact, and, Jenkins said, finding a better living situation for Duncan’s partner Louise Troh and the three young men who had been placed under quarantine with her in the apartment. Law enforcement officers stood outside the door blocking the family’s exit from a home where they were forced to stay with linens stained with the sweat of a man infected with one of the most deadly diseases known to man.

“One of the first things we wanted to do is move the family,” Jenkins said. “The problem is that when you’ve got Ebola, it’s very difficult to find somebody that wants to open up a shelter or a home or rent to you even if you want to pay for it.” Jenkins said his office called the Greater Dallas Apartment Association, the Dallas Housing Authority and “basically called through every listed renter in Dallas.” All turned them down.

As much as with Ebola itself, Jenkins has been doing battle a contagion that can under the wrong circumstances turn just as deadly: fear. If people with the sniffles convinced they have Ebola start overfilling the Dallas-area’s already stressed emergency rooms—Texas has the highest rate of uninsured citizens in the country—perfectly treatable infirmities could become more lethal. If scared parents keep their kids out of school too long, it creates a whole separate problem in the education system—one, as it happens, that Jenkins would also be responsible for fixing.

That is why Jenkins obsessively reminds anyone who will listen of Ebola’s achilles heel: it isn’t contagious unless a person is showing symptoms of the disease. It’s the key both to stopping pandemic fear from disrupting day to day life and to defeating Ebola itself. Isolate and monitor the health of everyone who might be infected for a 21 day incubation period and, if they are symptom free, they’re healthy and you’ve beaten the disease.

To get this point across, Jenkins has employed some unorthodox tactics over the past week, like walking into an apartment where an Ebola patient had been staying without protective gear. Clearing the apartment of both contaminated linens and the symptom-free people in it was delayed by permitting issues and “that’s when I went out to see Louise and the young men,” Jenkins said, “to go into their apartment and see them as human beings and explain to them the situation.” But by entering the apartment Jenkins was also, at least as importantly, sending the message to the wider world that hazmat suits milling around or not these people, lacking any symptoms, were incapable, even if infected, of passing along Ebola.

Unsuccessful in finding anywhere else for Louise and the young men to stay, Jenkins said he called a local faith leader. “What I told them is there is literally no more room at the inn and I need your help,” he said.

The same impetus that led him to enter the apartment helps explain Jenkins’ decision to drive the family himself to their new home. Philip Haigh, a member of Jenkins’ executive staff, was initially set to drive the Ford Explorer while Jenkins rode along and spoke with the family but when they couldn’t all fit because a seat couldn’t be raised out of the down position Jenkins took the wheel and Haigh rode behind in a police cruiser.

“The sheriff’s deputy that I ended up riding with initially didn’t shake my hand because he was afraid that I had gotten too close to the scene,” Haigh told TIME. By driving the car himself, Jenkins sent the same message as before to first responders: until a person show’s symptoms, Ebola isn’t contagious and fear itself is the greater enemy.

Jenkins drove Troh and the three men to their new temporary home, where, according two people who have spoken with her on the phone, Troh is comfortable and understandably glad to be away from the apartment in which she was imprisoned the better part of a week. “They can go outside, they have room to roam,” Jenkins said. “It’s the kind of place that a young man can go out and exercise and even explore. Walk around. It’s a large premises away from other people.”

After dropping off the family Jenkins spoke to the press. “I’m wearing the same shirt I was when I was in the car for 45 minutes today with that family,” he said. “If there was any risk, I wouldn’t expose myself or my family.”

For now, pandemic fear has not gripped the better part of the Dallas area. Life goes on as before, except among the Liberian community here, where rumors fly about stigmatization at work and school and people typically prone to warm embraces keep their distance even from each other. With Louise Troh and the boys in a safe place and everyone who Duncan may have interacted with identified, Jenkins’ office must now wait and hope: that Thomas Eric Duncan survives and that no one else gets sick.

In the meantime, there was some good news. The Cowboys won Sunday with a field goal in overtime. 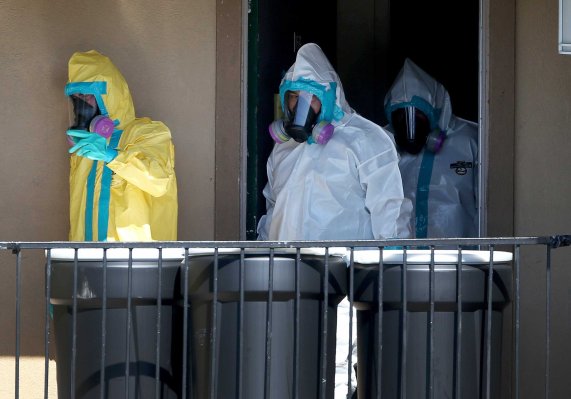 The Politics of Quarantines, From Typhoid Mary to Thomas Eric Duncan
Next Up: Editor's Pick