Greasing the Skids of War: Rethinking the Carter Doctrine

As the U.S.-led war in Syria enters its third week, Americans can be excused for believing their nation has been shooting up the Middle East forever.

But they’d be wrong. It’s only been going on, off and on, since 34 years ago. That’s when, shortly after the Soviet Union invaded Afghanistan, President Jimmy Carter told Moscow—and anyone else who might be listening—that Washington was willing to go to war to keep the Persian Gulf’s petroleum tap open and fueling the U.S. economy.

“The region which is now threatened by Soviet troops in Afghanistan is of great strategic importance: it contains more than two-thirds of the world’s exportable oil,” Carter said in his final State of the Union address on Jan. 23, 1980.

“The Soviet effort to dominate Afghanistan has brought Soviet military forces to within 300 miles of the Indian Ocean and close to the Strait of Hormuz, a waterway through which most of the world’s oil must flow,” he continued. “Let our position be absolutely clear: an attempt by any outside force to gain control of the Persian Gulf region will be regarded as an assault on the vital interests of the United States of America, and such an assault will be repelled by any means necessary, including military force.”

So here we are, a generation later: the Soviets are out of Afghanistan, and America is in.

And even though the fight in Afghanistan is the nation’s longest war—and gets longer every day—it’s only one of many Islamic hotspots the U.S. has struck since Carter put down his Middle East marker. Former Army officer Andrew Bacevich, now at Columbia University, rattled them off Sunday in a column in the Washington Post:

President Obama acknowledged the toll Sunday, when he spoke at the dedication of the new American Veterans Disabled for Life memorial near the Capitol. “Let’s never rush into war, because it is America’s sons and daughters who bear the scars of war for the rest of their lives,” he said at the memorial, which honors the nation’s 4 million disabled vets. “Let us only send them into harm’s way when it’s absolutely necessary.” Perhaps there was a whiff of hindsight in his words.

But it may be foresight to revisit Carter’s declaration. While the hunger for oil remains relentless, the U.S. is far more energy independent today than it was in 1980. That should allow the U.S. to ease its addiction to Persian Gulf oil, which too often has served to grease the skids of war.

“This July the United States replaced Saudi Arabia as the world’s No. 1 oil producer,” Arthur Herman of the Hudson Institute wrote last month in National Review, “and virtually every industry study indicates that the trend will continue through the next two decades and beyond.” Much of the U.S. gain is due to hydraulic fracturing, or fracking, a production method that now accounts for roughly a third of U.S. oil and gas production.

Actually, U.S. taxpayers have spent close to $10 trillion to keep oil flowing to the world from Persian Gulf, based on a 2010 analysis from Roger Stern, an economic geographer at Princeton University.

Imagine if a slice of that had instead been invested to speed up U.S. energy independence. Wars would surely still unfold in the Middle East—as they will likely do so for generations—but it’d be bracing to watch them from the sidelines, for a change. 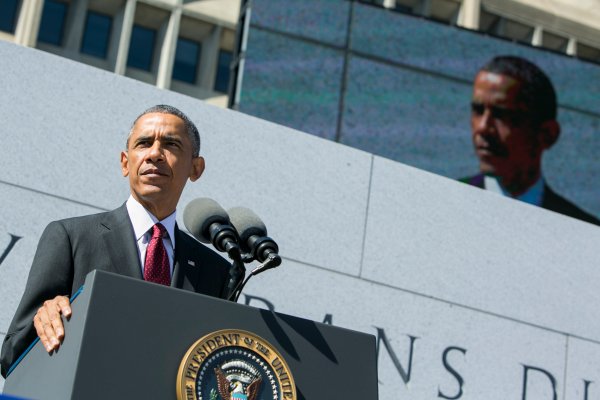 Obama: 'Do Not Turn Away' From Injured Veterans
Next Up: Editor's Pick