Class is in session—and it's one you'll enjoy
Ideas
By Michael D. Lemonick

Sometime during middle school, I showed my father something I’d written for a class assignment. About halfway through reading, he stopped, pointed and said “that’s grammatically incorrect. You wrote ‘I will now describe.’ The correct wording is ‘I shall describe.'” The word “will”, he told me, implies defiance and determination. But if your sentence starts with the pronouns he, she, we, you or they, the rule is reversed.

It sounded nutty, to say nothing of pointlessly precise, but that was evidently what he’d learned in grade school back in the 1930’s. As far as he was concerned, that made it an eternal truth. For decades now, I’ve just assumed that the rule had gone out of style—but on reading Steven Pinker’s charming and erudite new book The Sense of Style: The Thinking Person’s Guide to Writing in the 21st Century, I’ve learned that there never was such a rule, in the sense of something that was universally agreed on by language experts.

If anyone should know, it’s Pinker. Not only is he an extraordinarily stylish and prolific writer himself—he’s written on the history of violence, why words don’t mean what they mean, the mystery of consciousness, the role of genes in shaping character, how the mind works and more—but he’s also got the intellectual chops to back up what he says, what with his being a psycholinguist and neuroscientist at Harvard and all.

With that backing him up, it’s no surprise that while The Sense of Style is very much a practical guide to clear and compelling writing, it’s also far more. Pinker dives deep into the neuroscience of language to explain why some writing is clear, some murky and some sublime.

Style has all the fun stuff that makes usage guides so popular. For example, he lambastes the language scolds who wag their fingers over such evils as split infinitives—absurdly, Pinker says, because the rule against them is based on the fact that infinitives such as “to go” are single, unsplittable words in Latin and other languages that arose from it. Our two-word infinitives should not be governed by the old one-word rule—meaning that Captain Kirk was just fine, when he said “to boldly go.” Pinker pooh-poohs the idea that words must always stick to their original meaning: “decimate” means “to cut by ten percent” in Latin; now people use it to mean “more or less destroy,” and that’s fine with him.

Sometimes Pinker works a little too hard at this debunking campaign. He informs us that while “ain’t” is generally incorrect, it’s fine when used in expressions like as “it ain’t over till it’s over.” But since nobody has thought otherwise since the Herbert Hoover administration, it’s a point that hardly needs to be made.

Pinker then steps back from talking about excessively fussy rules to talk about something he calls “classic style”—a concept he attributes to the scholars Mark Turner and Francis-Noël Thomas. The basic rule here is “write clearly,” and Pinker’s advice on how to do so is pretty standard, albeit written with great clarity.

Among his suggestions: read your prose out loud to yourself in order to pick up on awkwardnesses that might not be evident when you’re reading silently; avoid jargon; keep your sentences short; jettison superfluous and unnecessary words—like, say, using both “superfluous” and “unnecessary” when just one will do. In one of the many tables of good versus bad that appear in the book he shows how phrases such as “for the purpose of” or “in view of the fact that” can be replaced simply by “to” or “since” with no loss of meaning.

Finally, Pinker plunges into what really sets this book apart: the neuroscientific underpinnings of what makes some writing good and some bad, based on how our brains process language. Classic style or not, this bit takes a fair amount of work to get through. Pinker acknowledges that many very good writers get by purely on intuition, but, he says:

Well, maybe. But the chapter that covers these ideas is filled with sentence diagrams and technical language that runs the risk of making aspiring wordsmiths run screaming from the room. Here’s a passage in which Pinker tries to move the awareness-cultivation process along, talking about a set of words he calls “determiners.”

There’s lots more of this sort of thing, which Pinker thinks “can take the fear and boredom out of grammar.” I’m not entirely sure about that. For experienced writers, however, it’s pretty fascinating stuff—the unconscious mechanics that underlie the instincts they’ve developed through experience.

In the end, Pinker’s formula for good writing is pretty basic: write clearly, try to follow the rules most of the time—but only the when they make sense. It’s neither rocket science nor brain surgery. But the wit and insight and clarity he brings to that simple formula is what makes this book such a gem. 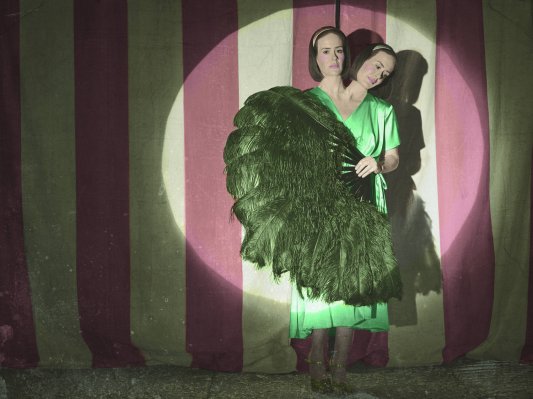 Freaks and Shrieks on American Horror Story: Freak Show
Next Up: Editor's Pick