Dallas County, County Judge Clay Jenkins walks with an acquaintance from the apartment where an Ebola virus patient was staying at the Ivy Apartments on October 3, 2014 in Dallas, Texas.
Joe Raedle—Getty Images
By Alice Park and Denver Nicks

The first person to develop the Ebola virus in the United States is in critical condition, a spokesperson for the Dallas hospital where he’s being treated said Saturday. The patient, Thomas Duncan, was previously listed in serious condition, and his change in status means his health is degrading.

“We understand that his situation has taken a turn for the worse,” Centers for Disease Control and Prevention Director Dr. Thomas Frieden said of Duncan’s condition in a Sunday press conference. Frieden added that Duncan is “fighting for his life.”

The news of Duncan’s failing health comes as his partner and the three young men living with her in the Dallas apartment where Duncan stayed before he became sick were moved to a temporary residence. Dallas County Judge Clay Jenkins, who heads up the city’s emergency response, drove the four individuals to their new home on Friday night. Jenkins said on Friday that he hoped to find them accommodations with appliances that would make the four family members more comfortable during their quarantine, such as their own washer and dryer.

In a Saturday news conference, Frieden said CDC and local health officials are now monitoring 40 people who had some level of contact with Duncan, including nine who had direct contact with Duncan. It’s not clear how many of those are health care workers or patients at Texas Health Presbyterian Hospital, where Duncan is being treated, and how many are community members, including those who live in the apartment complex. On Sunday, a homeless man with whom Duncan had some level of contact was found after being sought by officials for monitoring.

Medical waste generated by Duncan during his stay at the hospital, including gowns and personal protective equipment worn by health care providers caring for him, remain at the hospital, said Dr. David Lakey, commissioner of the Texas Department of State Health Services. The waste removal company has now secured the proper Department of Transportation hazmat permits to transport the waste, and is set to do so on Monday.

Duncan originally went to the hospital on Sept. 25, but was released despite having told staff there he recently traveled to Liberia, the heart of West Africa’s Ebola crisis. He was re-admitted three days later when his condition worsened. While Texas Health Presbyterian Hospital originally blamed technical glitches for the failure in getting Duncan’s travel history to the right people, the facility walked back that claim Saturday, raising questions about the hospital’s procedures during what’s become the worst-ever Ebola outbreak. 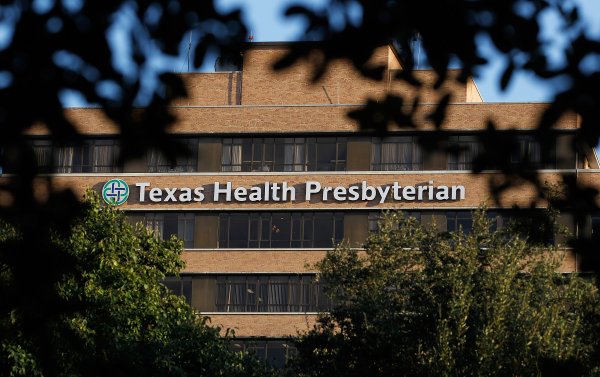