A general view of Texas Health Presbyterian Hospital Dallas where a patient has been diagnosed with the Ebola virus on September 30, 2014 in Dallas, Texas.
Mike Stone—Getty Images
By Sam Frizell

The Texas hospital that initially released the first Ebola patient diagnosed in the United States acknowledged Friday evening that medical staff had access to the fact that he had just arrived from Liberia, one of the countries worst hit by the outbreak, raising questions about the hospital’s procedures.

Texas Health Presbyterian Hospital in Dallas first admitted Liberian national Thomas E. Duncan in its emergency room on Sept. 25. Duncan was then sent away on the mistaken belief that he had a low-grade fever from a viral infection, allowing him to come in potential contact with dozens of people, some of whom are now being monitored for the virus. A nurse initially failed to tell a doctor that Duncan had just come from Liberia, and a physician didn’t ask. Duncan was readmitted to the hospital three days later when his symptoms worsened.

Initially, on Thursday, Texas Health blamed a technical flaw in its electronic health records system for its decision to send Duncan home. But on Friday evening, the hospital took back that statement and said “there was no flaw” in its records, the New York Times reports, and that hospital staff could see Duncan had been in Liberia.

The “patient’s travel history was documented and available to the full care team in the electronic health record (E.H.R.), including within the physician’s workflow,” acknowledged the hospital.

“In a well-functioning emergency department, doctors and nurses talk to each other,” Dr. Ashish Jha, a professor at Harvard University’s School of Public Health, told the Times. “Also, why didn’t the physician think to ask the question separately? Anyone who comes in with a febrile illness, a travel history, that’s a fundamental part of understanding what might be going on.”

More than 3,000 people have already died of Ebola in Africa. In the U.S., health officials have narrowed down the list of people considered most at risk of contracting Ebola to 10 while moving the four people with whom Duncan shared an apartment from their potentially contaminated quarters. 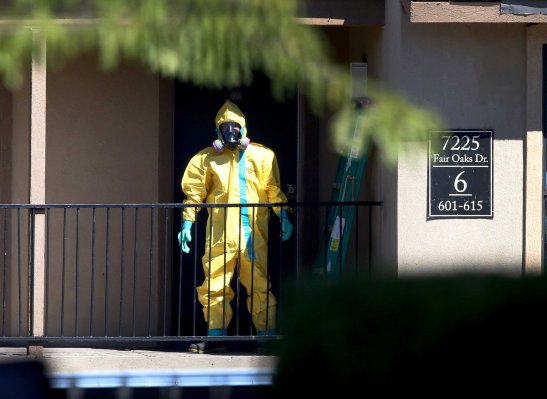 U.S. Officials Urge Calm in Face of Ebola Concerns
Next Up: Editor's Pick