The deputy chairman of the Hong Kong Legislative Council’s security panel has reportedly said that the government is working with criminal gangs to break-up student democracy protests.

According to the South China Morning Post, pro-democracy legislator James To told a hastily convened press conference of democratic lawmakers Saturday that “the government has used organized, orchestrated forces and even triad gangs in [an] attempt to disperse citizens.”

Hong Kong’s pro-democracy protesters faced a bloody backlash Friday, as a violent mob, many of them masked, attacked demonstrators gathered at Mong Kok and Causeway Bay, throwing punches, tearing down banners, and slashing at tents with scissors. Some female students reported being sexually assaulted and the police have been accused of not doing enough to protect students.

Many bystanders and activists said that members of triad gangs were involved in the attacks and police confirmed that eight of the 19 people arrested in Mong Kok Friday night were suspected of having backgrounds in organized crime. The district is a known hotbed of triad activity.

As the city woke from a night of political violence, students sardonically erected a sign pointing to the Central Government Offices that read “and Triad offices.”

The Secretary of Security, Lai Tung-kwok, issued a robust denial of any police-triad collusion Saturday. “The accusations against police were fabricated, over-the-top and unreasonable. They are also unfair,” he told the South China Morning Post.

Conspiracy theories aside, it is clear that the anti-Occupy crowds—who wear blue ribbons because blue is the color of the police uniform—are largely composed of ordinary citizens who have lost patience with the disruptions caused by pro-democracy protests.

“The order of Hong Kong has been disrupted, traffic paralyzed, stores forced to close, people cannot commute to work and students cannot attend classes,” one of the conveners of the blue-ribbon movement, Leticia Lee, told the Hong Kong Standard. “Occupy participants do not represent the viewpoints of all Hong Kong people.”

Many blue-ribbon supporters appear to have strong ties to the uniformed services.

At least 200 gathered by a historic clock-tower in Kowloon on Saturday afternoon, under banners reading “Alliance in Support of Our Police Force.” A speaker addressed the crowd from a stage, declaring “Occupation is violence.”

Another blue-ribbon supporter, 50-year-old interpreter Amy Chang, said that the students “have the right to voice their opinions legally,” but “the way they do it now is affecting people.” She added: “People are so fed up.”

A tense pall hung over the city during the afternoon as large numbers from the blue-ribbon and pro-democracy camps continued to jostle and trade heated words at Occupy sites.

—With reporting by David Stout/Hong Kong 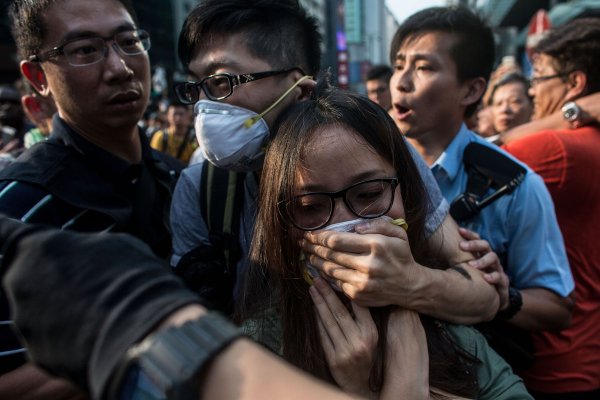 Hong Kong Braces for Violence
Next Up: Editor's Pick