Concerned that Abraham Lincoln’s gaunt, worry-lined face was so severe it might scare off voters, 11-year-old Grace Bedell crafted a solution: Grow a beard.

On this day in 1860, the Westfield, N.Y., tween wrote a letter to the Republican nominee outlining her plan to help him win the upcoming presidential election. It reads, in part:

Until then, the frontier lawyer had lived a clean-shaven life, apparently aiming for a statelier look than Bedell gave him credit for. “Lincoln’s Beard,” a 1935 publication by the Lincoln National Life Foundation, explains:

But Lincoln was not afraid of change. He wrote Bedell back four days later, answering her question about whether he had any daughters (he did not) and asking one of his own: “As to the whiskers, having never worn any, do you not think people would call it a piece of silly affectation if I were to begin it now?”

He appears to have answered his own question, since he began growing his facial hair shortly after. He had a full beard when, on his way to his 1861 inauguration, he arranged to have his train stop near Westfield so he could greet his young pen pal. She later recalled that he shook her hand and said, “You see? I let these whiskers grow for you.”

The whiskers have since become inseparable from the memory of the man; no card-carrying Lincoln impersonator leaves home without them. Even a pre-beard portrait was old-timey-photoshopped to include whiskers after Lincoln took office. “Currier & Ives, through a process of retouching, brought one of their smooth-faced Lincolns up to date by putting a beard on him,” wrote the authors of Lincoln’s Beard.

Still, Lincoln’s fear that the whiskers would be ridiculed as a “silly affectation” was not completely off the mark. Two months after corresponding with Bedell, he found himself punned about in the Evansville Daily Journal: “They say that Old Abe is raising a pair of whiskers,” the story went. “Some individual of the cockney persuasion remarked that he was ‘a puttin’ on (h)airs.’ ”

Read all about Lincoln impersonators here, in TIME’s archive: It’s Not Abe. Honest. 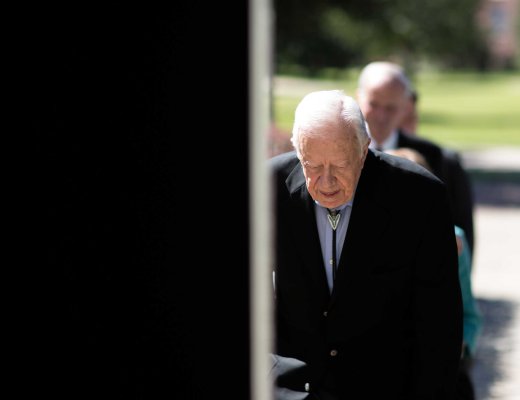 Jimmy Carter Thinks Obama Blew It on ISIS
Next Up: Editor's Pick