Five Things We Learned About Lady Gaga From Her Reddit AMA

Reddit, the internet clearinghouse for rumors and jokes about horse-sized ducks, is a strange place to promote a jazz album. But never let it be said that Lady Gaga isn’t an innovator.

In an “Ask Me Anything” session today, the pop singer — whose album-length collaboration with Tony Bennett, Cheek to Cheek, recently debuted at number one on the charts — ran through her recent history. Turns out that even one of the most exposed celebrities of the past decade had things left to reveal.

The choice of venue may be a sign that the pop star is learning to pivot. Her 2013 album, Artpop, generated no major hit songs and was a sales disappointment, despite a near-overwhelming publicity blitz; in promoting Cheek to Cheek, the star appears to be taking a lower-fi approach. If Cheek to Cheek continues to perform on the charts, it may help to prove that the classic album-release strategy (big fashion magazine covers, awards-show performances) is less effective than connecting directly with fans.

Not that Gaga was willing to chat about everything. Here are a few of the biggest revelations from her Ask Me Anything session:

She’s not ready to talk about Terry Richardson and R. Kelly: Some commenters on Reddit speculated that the go-between dictating questions to the pop star didn’t even read her this question, about Lady Gaga’s working with Terry Richardson and R. Kelly (both of whom have been accused of sexual assault) on her never-officially-released “Do What U Want” video, which depicted Kelly drugging and violating Gaga. Either way, the pop star remained silent on the issue; after all, enough time has passed without her comment that many people have forgotten the imbroglio entirely.

She’s inspired by botany: Turns out the “Gaga” genus of ferns, discovered by scientists in 2012, could mean anything. Asked about the unique honor, Gaga responded with a deep thought about how plants live without judgment: “its pretty cool, especially since it is a-sexual fern […] All sexless, judgeless, How cool. How I wish to be.”

The famous “meat dress” was constructed by: “A butcher and some fishing line.”

She’s multifaceted: Lady Gaga is both “really into healing” and likes “to shoot beer cans off the porch in PA with my bf, off our camo 4-wheeler.” The former is exactly what one would expect a contemporary pop star to say. The latter? We’ll believe it if we see a photo.

Her favorite condiment is mayonnaise: You just have to get through a paragraph about how much she loves her fans to learn the most important detail of all. 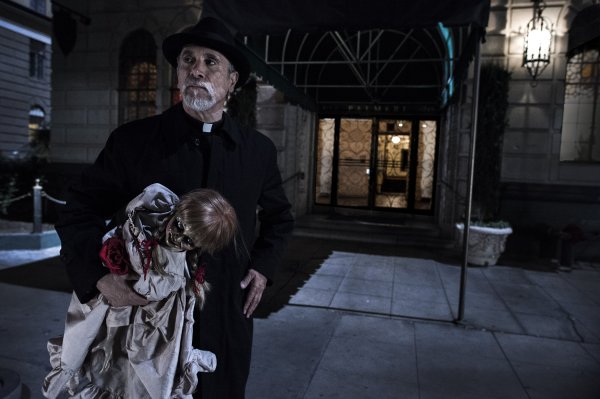 Review: 'Annabelle' Conjures Up a Devil Doll
Next Up: Editor's Pick