Speaking to Harvard students in a question-and-answer session Thursday, Biden was asked whether he believes the U.S. should have acted earlier in Syria, a critique leveled by former Secretary of State and likely Democratic presidential candidate Hillary Clinton, as well as former Secretary of Defense Leon Panetta in recent memoirs.

“The answer is no for two reasons,” Biden said. “One, the idea of identifying a moderate middle has been a chase America has been engaged in for a long time. We Americans think in every country in transition there’s a Thomas Jefferson hiding behind some rock, or a James Madison beyond one sand dune. The fact of the matter is, the ability to identify a moderate middle in Syria was—there was no moderate middle, because the moderate middle are made up of shopkeepers, not soldiers; they’re made up of people who, in fact, have—ordinary elements of the middle class of that country.”

The vice president continued that it was “inappropriate” for former administration officials to write books while Obama is still in office.

“And what happened was—and their history will record this, because I’m finding that former administration officials, as soon as they leave write books, which I think is inappropriate. But any rate,” Biden said as the audience chuckled. “No, I’m serious. I do think it’s inappropriate. At least give the guy a chance to get out of office.”

Clinton’s book Hard Choices includes details of internal deliberations where she unsuccessfully pressed President Barack Obama to arm Syrian rebels in 2012, one of the only clear denunciations she makes of the president in the book. “The risks of both action and inaction were high,” Clinton wrote. “Both choices would bring unintended consequences. The President’s inclination was to stay the present course and not take the significant further step of arming rebels.”

In Panetta’s forthcoming memoir, Worthy Fights, excerpted in this week’s TIME, the former Pentagon chief takes issue with Obama’s handling of the U.S. withdrawal from Iraq and the subsequent rise of ISIS in Syria. “To this day, I believe that a small U.S. troop presence in Iraq could have effectively advised the Iraqi military on how to deal with al-Qaeda’s resurgence and the sectarian violence that has engulfed the country,” Panetta writes.

Left unsaid by the vice president, is that he often argued for caution against intervention in the debates highlighted by Panetta and Clinton, according to current and former officials’ accounts. 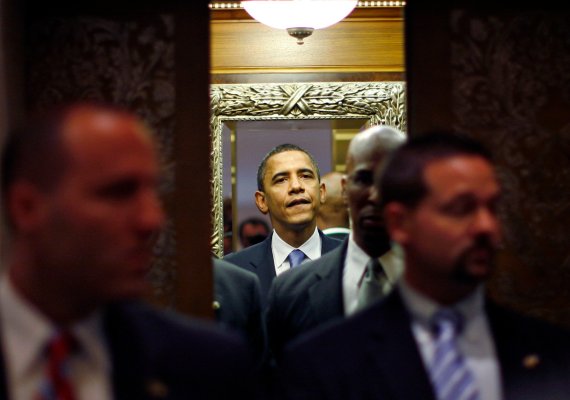 Secret Service Has 'Elevator Manifest' for President
Next Up: Editor's Pick