What’s the most important thing to keep in mind when you achieve something great? Easy: don’t start promising more greatness to come. It’s fine to hoist a Super Bowl trophy, but that’s not the time to predict a threepeat over the next couple years. Ditto the first-time Oscar winner who goes public about buying a new mantlepiece for all the statuettes to come; ditto too the one-hit wonder who’s already boasting about one day joining the Rock and Roll Hall of Fame.

That’s just the hubris that afflicted Burt Rutan, Paul Allen and the other folks behind SpaceShipOne a decade ago when their little rocket plane won the $10 million Ansari X-Prize, beating 25 other teams from 10 nations competing to be the first private group to pull off a piloted suborbital space flight twice within two weeks. After that mission was accomplished, Rutan, the ship’s designer, publicly predicted that the big aerospace players like Boeing would realize they had just lost out in the most promising new market of all: space tourism. “I think they’re looking at each other now and saying, ‘We’re screwed,'” he averred.

Almost immediately, he and Allen—the co-founder of Microsoft—licensed the SpaceShipOne technology to Virgin Atlantic’s Sir Richard Branson, who predicted a five-ship fleet with a five-person capacity on each vehicle within three years. So how’s all that working out?

SpaceShipOne, for all of the understandable applause its gutsy mission earned, was always overhyped. The ship was required to achieve an altitude of at least 100 km (62.5 mi.)—which it beat slightly—then arc over in three minutes of weightless flight and return safely to earth. Nifty stuff, but it’s also something the U.S. accomplished with the flight of Alan Shepard as long ago as 1961, and the old Soviet Union didn’t even bother with since they were capable of achieving orbit—where you can get some real flying done.

The scientific applications for SpaceShipOne are limited too. Yes, there are some basic experiments that can be run during the brief cosmic toe-dip of a suborbital flight, involving testing hardware in space conditions, studying the behavior of fluids and other substances, and making brief atmospheric measurements. But if popgun missions like that could do the really substantive stuff, we wouldn’t have built a massive orbiting lab like the International Space Station (ISS).

Instead, the promise has always been space tourism—offering paying passengers the chance to experience space and, after a fashion, call themselves astronauts. There are now up to 20 companies around the world competing in this new game—including big names like Jeff Bezos’ Blue Origin and Branson’s Virgin Galactic—but none have flown so much as a single paying customer.

Branson’s Virgin Galactic is the closest to delivering. His SpaceShipTwo is the direct descendant of the original Rutan-Allen ship, and he has signed up a long list of potential passengers who have all put down deposits toward their $200,000 fare. Last year, TIME attended something of a pep rally at the outfit’s Mojave Desert headquarters, during which hundreds of those passengers-on-standby gathered, mingled, ate high-end finger food and cheered speeches and videos hyping the ride to come. But a promised test flight of the ship was scrubbed due to high winds and that day’s much-repeated pledge that the spacecraft’s maiden space trip would occur before the end of the year has slipped—as it has so many times before—this time to what Branson describes only as “earlyish in the new year.” As recently as August, he said he’d be “bitterly disappointed” if he didn’t make his before-2015 deadline.

None of this is to say that space tourism is doomed, but it is to say that the thinking behind it has always been flawed. The Ansari XPrize was modeled after the 1919 Orteig Prize, which offered $25,000 (the equivalent of $344,000 in 2014) to the first person who could fly nonstop from New York to Paris. Charles Lindbergh won that one in 1927 and before long, his historic trip became one anybody could make. But air travel is not space travel—an exponentially harder, riskier and costlier proposition. SpaceShipOne—despite the decade-old hoopla—was never the achievement of a dream, it was merely the beginning of one. Its true fulfillment is still many years away. 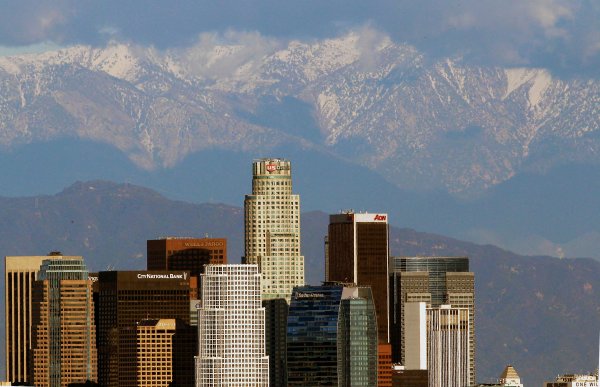 Good News, Southern California: The Smog Is Going Away
Next Up: Editor's Pick