Matt Karwowski is a disease detective. That’s what the Centers for Disease Control and Prevention (CDC) calls the tiny team of epidemic intelligence officers dispatched to stem the spread of the Ebola virus in Dallas. You won’t see him on television, and you’ve never heard his name, but at this moment, Karwowski and his colleagues are the most important sleuths in the country.

As Thomas Eric Duncan was diagnosed with Ebola on Sept. 30, Karwowski was scrambling to pack up his gear and hop a plane from Atlanta. Since arriving that night, he’s spent 18-hour days zigzagging through north Dallas, tracing Duncan’s spiderweb of contacts. One of four CDC disease detectives roaming the community, he was assigned at the outset to tackle the high-priority cases: the handful of people at the greatest risk of getting sick.

That means knocking on doors at the Ivy Apartments, where four of Duncan’s family members are under quarantine, sleeping in the living room as they waited days until a cleaning service finally collected the infectious sheets the patient slept on. It means visiting the medical professionals who may have been exposed to the virus while treating or transporting Duncan. It means explaining containment techniques to frightened parents, and helping to pass out crayons and coloring books to soothe a child who’s too young to know what’s happening but old enough to sense his family’s fear.

Karwowski is what’s known in the medical community as a contact tracer. It is the shoe-leather process of canvassing all the people who may have encountered the virus, a job that is part medicine, part social work and part investigator. “The whole idea with contact tracing is to interrupt the chain of transmission,” says Karwowski, 34, who spoke to TIME at Texas Health Presbyterian hospital, in the first interview granted by a member of the CDC’s contact tracing team in Dallas. “I can’t characterize how important this is.”

Beginning with the patient, the tracers in Dallas divided into teams—usually one CDC detective and one county or state-level tracer—to map the contours of the community’s contact with Ebola. Their task is to identify the people who encountered Duncan while he was sick, and conduct interviews to find the next links in the chain of human contact. Then they locate those people and interview them. The process unfolds in concentric circles, with the original patient at the center. Once the tracers piece together the full network, they conduct daily check-ups to monitor symptoms, take temperatures, answer questions and allay fears. Then rinse and repeat for 21 days, the virus’s incubation period.

Contact tracing may sound simple, but it’s the linchpin in the U.S. government’s strategy to stop the spread of Ebola. As scary as it may seem, there are few ways to prevent the virus from arriving stateside. Experts are leery of cutting off flights from stricken West African countries, because doing so would prevent health workers from snuffing the outbreak at its source. The U.S. can’t stop patients incubating the virus from boarding those planes, because there’s no way to screen for it effectively; Ebola can’t be detected in the blood until its symptoms erupt. So health experts rely on contract tracing, which contained the spread of the virus in Nigeria and Senegal. “Contact tracing is a core public health function,” said CDC director Dr. Thomas Frieden. The CDC believes the method can “stop the virus in its tracks.”

The CDC’s 10-member team in Texas is led by Dr. David Kuhar, a senior epidemiologist and infectious-disease specialist. In total, it has three senior scientists specializing in infection control, a communications officer, a public health adviser, and five epidemic intelligence officers like Karwowski. The community contact-tracing operation is led by Dr. Stephanie Schrag, a top epidemiologist, and also includes other young disease detectives like Charnetta Smith and Michelle Chevalier, both OB/GYNS. “I think it’s really every young medical epidemiologist’s dream to have this kind of experience,” Karwowski says.

He may seem an unlikely choice to pull the assignment. Originally a pediatrician, Karwowski joined the CDC on July 1. This is not just his first encounter with Ebola; it’s his first field deployment. On Sept. 1, he was assigned to a month-long rotation at the agency’s emergency operations center in Atlanta, crunching data alongside hundreds of staffers working with the CDC’s response to the outbreak in West Africa. On the final afternoon of the rotation, as word broke that Duncan was positive for the virus, Karwowski got the call that he was headed to Dallas. “He is a mature and experienced clinician,” explains Dr. Stephanie Bialek, an epidemiologist helping to lead the CDC’s Ebola response, who says Karwowski was selected in part for his “high level of diplomacy” and communication skills.

Though new to the job, he seems suited to the role. Slim and soft-spoken, with short brown hair and stylish glasses, Karwowski has the kind of calm, empathetic quality that you’d expect to forge trust in a frantic setting. “You want to make sure you develop a good relationship with the contacts,” he says. “You approach them with cultural sensitivity. You want to make sure to develop good rapport, that you convey the impression that you truly are there to safeguard them and the community. That’s a critical portion of contact tracing.” On the job, he wears normal clothes—chinos and a button down. It’s hard to get people to trust you when you greet them in a medical moon suit.

Trust is key, because contact tracing only works if the contacts tell the truth. Eliciting information became a harder task this week, when local officials chose to place four of Duncan’s family members under quarantine. The prospect of being penned up inside for three weeks might dissuade potential contacts from coming forward with information.

“It definitely weighs into the equation,” Karwowski says. “We have to be very sensitive to the message that [quarantine] sends, and make sure that we are communicating why this decision was made, so that folks who are potential contacts are honest with us when we ask them questions about their exposure history. So that they understand that we are not doing this with the intention of putting them into quarantine, but so that we can put an end to this.”

Since they’re asymptomatic, and therefore not contagious, the people being monitored for Ebola are permitted to circulate in their neighborhoods as usual. They’re exhibiting all the emotions you’d expect: concern and confusion and even some chagrin. “They’re not just scared about getting Ebola,” Karwowski says. “They’re scared about how they’re perceived by the community, what it’s going to be like to reenter the community when it’s all over. They’re worried for their children.” People in Dallas are understandably concerned, and the media spotlight has magnified the crisis, making it harder for the epidemiologists and perhaps more likely for locals to shun the afflicted.

The job is grueling for the disease detectives as well. The old saw around the CDC is that the fight against Ebola is a marathon, but at this point in the marathon it’s a sprint. Karwowski is preparing for a two- or three-week deployment that could stretch on longer. More disease detectives will cycle in as the CDC, county and state health officials conduct the painstaking work. Karwowski, who has a wife and two young sons, calls home in his few moments of respite. Asked by a reporter of what the situation was like for his family, he choked up.

“We’re going to be able to contain” Ebola, he promises. But that doesn’t mean there won’t be more cases. “I hope there isn’t,” he says, but “I wouldn’t be surprised if there was.” 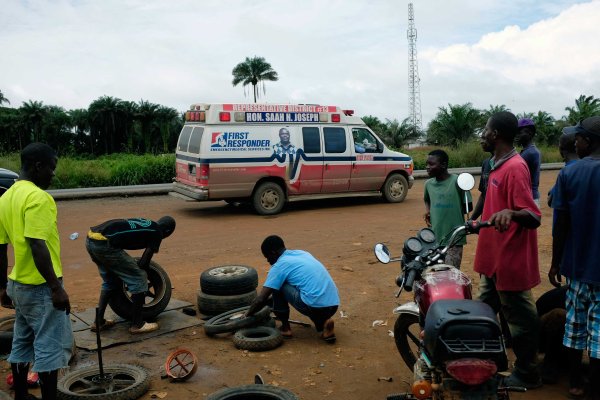