After a long night spent surrounding the offices of Hong Kong’s top leader, anticipating a police action that never arrived, protesters on Friday morning wondered what to do next — with many sensing that the authorities are simply waiting for the protests to wane.

“We’ve discussed that all night,” as one protester, Tsui Kit, 24, put it, when asked what the protesters will do if Beijing continues to do nothing. “But we still don’t know what to do,” she said, as the sun rose, waking the thousands of sleeping people lying on sheets of cardboard or on the bare concrete of Admiralty district, the ongoing hotbed of the demonstrations.

The tens of thousands of protestors who have convened in Hong Kong’s streets over the past week have expressed a single overarching goal: Beijing must rescind an Aug. 31 edict that says Hong Kong residents can only elect their top leader in 2017 from a list of candidates curated by an electoral committee plump with Beijing loyalists. Hong Kongers say this arrangement stacks the cards against Hong Kong’s interests being represented.

Other, shorter-term goals, including the resignation of the head of government Leung Chun-ying, are seen an intermediate steps that might whittle the numbers on the streets — but just for a short time, if universal suffrage does not follow soon afterward.

Yet how to achieve those goals is increasingly uncertain.

“Beijing seems to have decided, Well, we’ll just let them rot in the streets, and soon people will get bored and angry with them,” says Michael Davis, a law professor at the University of Hong Kong. “The protesters are going to need a long-term strategy if they’re going to deal with that.”

But so far, small schisms have appeared among protesters over how to answer the official waiting game: at twilight on Friday, university student Kenny Chung, 20, said that some in the group surrounding Leung’s office wanted to block yet another major artery — this time Lung Wo Road, a six-lane seafront drive. If it was closed, any vehicles wishing to enter the Central business district from the east would have to use Kennedy Road, a two-lane, colonial-era thoroughfare quite unsuited to heavy traffic.

“It would affect our economic system and our society,” said Chung, shaking his head.

The South China Morning Post reported that some demonstrations succeeded in partially blocking the road for a short time in the wee hours of the morning, but Joshua Wong, a 17-year-old key organizer of the protests, exhorted them to stop, and other protesters formed a human chain to keep the roads free.

“This is a war for public support,” Wong said. “We must show Leung that we have the support of the masses on our side.”

By the start of the working day, the road was clear for traffic, and a handful of volunteers were directing vehicles with glow sticks. One of the traffic controllers gently bowed to each of the cars that passed.

Indeed, protesters on the streets Friday were keenly aware that losing public support could sink their cause, especially as the demonstrations continue to snarl traffic and keep some businesses closed.

“We need to get more people to support us,” said Mak Ching-yin, 24, a recent university graduate, hovering near a police barricade, a medical mask dangling from around his neck. “If we get larger, we can’t be ignored.”

Several protesters also said they were hopeful that something good might come of a planned meeting between top government officials and protest leaders. On Thursday night, as Leung batted back calls to step down, he said his chief secretary, Carrie Lam, would meet with protest organizers. So far, pro-democracy groups Occupy Central and the Hong Kong Federation of Students have accepted the top leader’s meeting proposal, but no time or date has been set.

“We are waiting for the conversation to happen,” says Mart Kwok, 28, a social worker. “We will see if the government will compromise with us.”

But the only compromise he would be willing to accept, he said, is a leader directly elected by universal suffrage, calling it “a basic line that we won’t give up.”

Jimmy Lai, publisher of Hong Kong’s mass circulation Apple Daily newspaper and a prominent democracy campaigner, said that the movement had nothing to fear from disappointing talks with the government.

“Each disappointment energizes this movement,” he said. “The worst thing that could happen is that nothing is happening, and we lose energy, and people go home.”

Most Popular on TIME
1
What the Freemasons Taught the World About Secrecy
2
Footage Captures Horror During Floyd's Arrest
3
After 102 Days COVID-Free, New Zealand's Resurgence Highlights the Difficulties of Returning to Normal Life 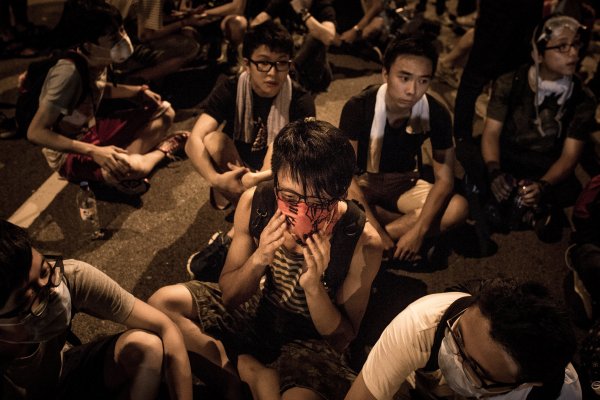