Luke Wilson: How I Made My Award-Winning Short Film Satellite Beach

In the fall of 2012, the actor Luke Wilson and a small film crew trailed the Space Shuttle Endeavor as it moved through the Los Angeles streets to the California Science Center. Wilson, along with his brother Andrew, shot largely improvised footage of a character named Warren Flowers (played by Wilson) who believes he is in charge of the shuttle’s journey; the footage became a 20-minute evocative short film called Satellite Beach (now available to purchase online). For Wilson, the experience allowed him the chance to make a film in a different way and to explore space travel, a subject he says he finds compelling.

A hit at festivals, where it’s snapped up a string of awards, Satellite Beach is an unusual film, and one that deftly twists the viewer’s expectations while showcasing what it was like to drive a space shuttle through LA’s busy streets.

Wilson spoke with TIME about how this project materialized, how it challenged him as an actor, and why it’s set him and Andrew up to direct an upcoming feature film.

TIME: Where did you get the inspiration for this short film?

Luke Wilson: There was an article on Sunday in the LA Times about the man who was in charge of the moving of the Space Shuttle Endeavor. He said a couple of interesting things, like that he went to bed thinking about it and he woke up thinking about it. He drove the route almost daily. He was obsessed with it. I thought it would be interesting to do a guy that thought he was in charge of it, but turns out not to be.

So did the people moving the shuttle know you were making this movie around them?

We just filmed here and there. There would be people that didn’t notice me; there would people who thought I was an official. And then there would be people that recognized me. If I was going to ask guys to move on a roof or something, I’d say, “We’re doing a little movie. Do you guys mind if I ask you to get down from there?” Everybody was into it. It reminded me of going to the Rose Bowl Parade as a kid, where we were in these parts of the city, and everyone was in a good mood, and there was a going-with-the-flow attitude.

Did you write the story beforehand, or just improvise as you went?

I worked it out all as I did it. I had the idea for a few scenes, and had the idea of how it would start and what would going on — knowing that gradually this guy would unravel, and people would see him unravel. Initially, the ending was supposed to be a gala at the California Science Center, and you think this guy is in charge until the end, when he can’t get into the gala. And then the transporter that moved the space shuttle broke down the first night, and they had to fix it. I always knew there were would be voiceover, and the voiceover would be dictated by the shots that we got.

That’s an interesting way to make a movie.

Yeah, it is. Not that it hasn’t been done, but I certainly hadn’t done it. And I’d always been interested in certain filmmakers or actors like Dennis Hopper, making experimental films. Or even Andy Warhol. I liked the idea of doing something off-the-cuff. When you’ve worked on a bunch of projects that have been stuck in development or waiting you think, “Gosh, someday I’d really like to make a movie my way” — which I still haven’t gotten to do, but we did get to make this short in this way. But it definitely came about from trying to emulate people I’d read about over the years.

You had directed previously, right?

Yeah, I had directed The Wendell Baker Story. It was this movie I’d written about ten years ago. My brother Andrew and I directed it together like we did with Satellite Beach. I’m not one of those actors who’s hell-bent on directing. It just seemed like a way to cut out the middle man. It’s hard enough to make a movie and we had a limited amount of time, so I didn’t want to have to be explaining to a director what I was trying to do.

As an actor, what’s exciting about being in a short film that’s largely improvised?

I found it really nerve-wracking! And I’m surprised we didn’t get arrested, frankly, as close as we were to the shuttle. We were asking people to move and going up to police and jumping over barricades. When they moved it across the Manchester Bridge they were filming a Super Bowl commercial, and I walked right into the middle of that. I went up to the mayor dressed as the character. I was definitely on edge the whole time, which I think helped. I was waiting to be put in the back of a squad car.

Did it feel like you were playing out some childhood fantasy about space travel at all?

It did. Just growing up, The Right Stuff was a big book and then a big movie. For me and the few friends who made [the movie], it was a huge deal to be around the space shuttle. Everybody was incredibly excited to see it and to be that close to it. It was the kind of thing where we were all elbowing each other and high-fiving each other. Also, getting to get to go Kennedy Space Center in Florida. That, too, was incredible. Just getting to be on that land that is so historic and iconic. We saw the Apollo launch pad. It kept changing the project — to think it just started with an idea from the newspaper and then it became this movie.

You’re also in The Skeleton Twins right now. What compelled you about that role?

I was a big fan of both Kristen Wiig and Bill Hader. It was one of those particularly strong SNL classes. I really liked their characters and I knew, having worked with Will Ferrell, that I love working with SNL actors. I watched SNL every Saturday night growing up. My dad would get us revved up when it was coming on in the ‘70s. So I still feel that way about the show and the people on it.

How does that role play into where you want to be in your career overall?

Do you have more movies upcoming?

I have this movie called Ride, which Helen Hunt directed. And then I have this movie called Prison Love that I wrote. We’re going to be doing it in the next few months, that Owen [Wilson] is going to be in. I will be directing it with Andrew, my brother. That will be fun to try and do that again, obviously on a larger scale than Satellite Beach — although I feel like Satellite Beach was helpful in terms of directing.

Is there a director you’ve worked with who has inspired how you want to do it?

Wes Anderson, for sure. I’ve also always liked what I’ve read about Clint Eastwood as a director. He’s not walking around shouting into a megaphone and wearing an ascot. I like the idea of it being a workmanlike job, and that you are a part of a team. Even though you’re in charge, you want people to feel free to contribute.

Wait — have you worked with a director who wore an ascot on set?

I don’t think so, but I’ve definitely worked with a few directors where I’ve found myself not listening to their direction. I was just imagining them wearing the ascot. 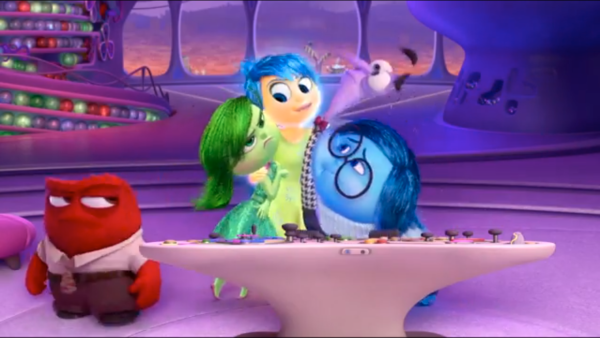 Pixar's Inside Out Trailer Is an Emotional Roller Coaster
Next Up: Editor's Pick