Latvia Wary of its Ethnic Russians as Tensions with Moscow Rise

For a woman Latvian intelligence services have named as a potential anti-state organizer, 29-year-old Margarita Dragile seems more worried about dinner than being a menace to society as she arrives at a Riga café for an interview with TIME this week.

Devouring her salmon and potato pancakes, Dragile wonders when she would have had time to plot against the nation last year when she was busy with the birth of her first child, and worries about the suspicion clouding the country’s Russian-speaking community as tensions with the Kremlin soar.

“We were perceived here as the hand of Moscow, even though we did nothing,” says Dragile. The teacher and social activist is singled out in the 2013 Latvian Security Police report issued in May for associating with two older activists accused of stirring unrest among the large ethnic Russian community. Her organization PEROM, which advocates for more rights for Russian speakers in Latvia, has also received financial aid from a Moscow-based cultural fund, Russkiy Mir (Russian World).

These are sensitive issues at a time when Russian President Vladimir Putin is using the pretext of protecting ethnic Russians in former Soviet states for territorial expansion. With a long history of Soviet occupation, a border with Russia, and the largest Russian-speaking community in the European Union, events in Ukraine have revived fears for Latvia’s own independence ahead of the country’s parliamentary elections this weekend.

The shadow of a resurgent Russia

While any military threat is remote, Russian fighter jets have been flying near Latvia’s borders, and Kremlin diplomats have upped their rhetoric about Riga’s alleged discrimination of the Russian-speaking minority. In response, Latvia has outlawed a Russian state TV channel, a Russian cultural festival, and a Moscow-based compatriot fund.

To the government, these are necessary measures as the country faces what Andrejs Pildegovics, State Secretary for Foreign Affairs, calls “the largest crisis since the demise of the Soviet Union”.

“We cannot repeat events of the 1940s or 1930s when many countries in Europe lost independence because of illegal acts of big powers at that time,” Pildegovics says. “Many bells ring when we hear that a leader of a neighboring country is dismissing the independent choice of the Ukrainian people… when we hear about the legitimate right of Russian leaders to protect everyone who knows a word or a syllable in Russian.”

But to many members of Latvia’s Russian-speaking community – about 37% of a population of two million – it is not only the Kremlin but the Latvian government harking back to the days of the Soviet Union. “The security police report resembles the documents issued by the KGB many years ago,” says Boriss Cilevics, a parliamentarian with the Harmony Center Party, which is predominately supported by ethnic Russians in Latvia.

The views of Russia are similarly cleaved along ethnic lines. A recent survey by Riga’s SKDS Research Center found that 64% of ethnic Latvians perceived Russia as a threat to the nation. Among Russian-speakers, that number plummeted to 8%, while over a third (36%) of the community supported Russia’s annexation of Crimea.

The question now dividing the communities is whether that split on Russia is susceptible to Kremlin attempts to drive an ever deeper ideological wedge between them, and even foment separatist sentiment and trigger Russian intervention in Latvia — which, unlike Ukraine, is a member of both NATO and the E.U.

Right now, ethnic Russians are largely happy being part of a prosperous EU nation, and Arnis Kaktins of SKDS sees no indication of separatist sentiment. Defense Minister Raimonds Vejonis blames speculation about independence movements on an information war from Russia.

This is a phenomena the government is struggling to tackle, as most of the Russian-speaking community get their news from Russian channels. “The fight is on for the minds of the Russian-speakers, and it is a very important fight,” says Cilevics, of the Harmony Center Party. “But if you want to gain trust you must show some respect.”

But trust among Russians in a government dominated by ethnic Latvians is in short supply. This suspicion is rooted in a historical grievance after the country’s independence.

The aliens at home

Sergey Tulenev, a 63-year-old political cartoonist and ethnic Russian, remembers the morning in 1991 when he woke up living not only on a new side of the Iron Curtain, but as a citizen of a different state to his wife. While she was a fully-fledged citizen of the new independent Latvia, which had just emerged from 51 years of occupation by the Nazis and then Soviets, he was now stateless.

Tulenev’s family were some of the 800,000 people brought in from elsewhere in the Soviet Union both to implement a ‘Russification’ of the Baltic State and to work in the factories, rail-roads, and on construction sites. He had voted for independence in the referendum of March 1991, but the new government decided that only descendants of people living in Latvia before 1940 would gain automatic citizenship.

In the intervening years the citizenship rules have been relaxed, but Tulenev’s bitterness has not subsided. “People like my parents were the people who built he factories, roads, trains,” he says. “They revived the country from the ruin of the war, and now their descendants are being blamed.”

Today, more than 300,000 people living in Latvia – most of them ethnic Russians who have been there for decades – remain non-citizens. They do not have the right to vote, and carry an “alien” passport. Many like Tulenev refuse to take the naturalization exam on principle, saying they are Latvian and do not need to prove it to the state. For the older generation, the Latvian language section is simply too difficult. Non-citizens’ children can however automatically become citizens.

Such tensions are readily exploited by the Kremlin. At a recent speech in Riga to a gathering of Russian Compatriots in the Baltic States, the Russian Foreign Ministry’s human rights representative, Konstantin Dolgov, told delegates that the issue of non-citizens in Latvia was “a gross violation of human rights at the very heart of civilized Europe”.

These sentiments find sympathy with people with Tulenev. He thinks Russia should help preserve their language and culture abroad through financial assistance, but laughs at the suggestion of military intervention: “No one speaks about tanks – these are just rumors from the United States of America and Barack Obama!” On balance, he says, he trusts Russian media more than Latvian or other Western channels.

A return to a ‘USSR mentality’

This increasing mistrust in the state is driving some voters towards the political fringes. At the last election in 2011, nationalist party the Latvian Russian Union got less than 1% of the vote. In European Parliament elections in May their support increased to more than 6%. At parliamentary elections on Saturday, they are hoping to reach the 5% needed to enter parliament.

The party openly supported Russia’s annexation of the Crimea. Election literature carries photographs of its vice chairman, Miroslav Mitrofanov, signing a cooperation agreement with Sergey Aksionov, the new Kremlin-backed leader of annexed Crimea. Party organizer Yury Petropavlovsky says they receive no support from Moscow and do not want any, but he was adamant about the right of ethic Russians to defend themselves and correct historical wrongs.

For a younger generation of activists, however, there is a desire to distance themselves from nostalgia for the Soviet era. Dragile attended the Riga compatriots’ conference, but disliked what she calls “the mentality of the USSR”. She says her group has now stopped taking money from Russkiy Mir after the backlash at home.

Another attendee, Aleksey Vesyoliy, who runs the Federation of Active Youth, was uncomfortable with political pressure exerted on delegates. “They want all compatriot organizations to follow Russian foreign policy,” he says. “Everyone should support Russian initiatives about the Second World War, about the First World War, and so then everybody is happy – your job as a compatriot is complete. I don’t agree.”

Pildegovics, the foreign affairs secretary, maintains that Latvia remains “an inclusive society which honors ethnic backgrounds and ethnic languages”, and anyone can become a citizen after a “very simple procedure”. But he says the government is ready to draw a line to prevent the spread of “subjects and values which don’t correspond to the mainstream values of the European Union.”

“Cultural diplomacy is important,” he says, “but we don’t like state-sponsored, state-run institutions which use culture as a pretext.” 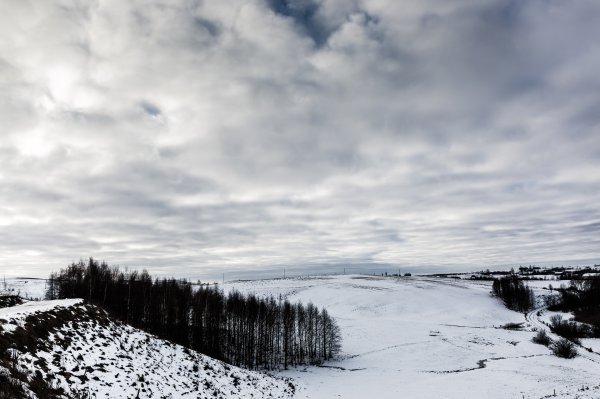 The Suwalki Gap: The Most Vulnerable Stretch of Land in Europe
Next Up: Editor's Pick