Ebola Just the Latest Hardship for Liberian Patient in the U.S.

A man who gave his name only as "Joe" and stated he was the brother of Ebola patient Thomas Eric Duncan talks to members of the media in front of a home in Kannapolis, N.C., Oct. 1, 2014.
Chuck Burton—AP
By Jay Newton-Small

For Thomas Eric Duncan, the visa to visit his family in the United States was a golden reprieve: a chance to escape the poverty and sickness surrounding him in the Liberian capital of Monrovia; a chance to visit family and friends, including his mother, sister, son and girlfriend; and a chance, maybe, to stay on and build a better, safer life. All those opportunities now hang in the balance as Duncan fights Ebola for his life in a Dallas hospital.

Duncan’s is the first case of Ebola diagnosed on U.S. soil, and in many ways, the 42-year-old is lucky to have developed the disease here. He caught it, according to the New York Times, helping carry a heavily pregnant neighbor back from the hospital where she was turned away from the overflowing Ebola ward. The 19-year-old girl died that night, early on Sept. 16. Her 21-year-old brother, who also helped carry her, died a week later in an ambulance on the way to the hospital. Duncan, by contrast, has a whole ward to himself in Dallas and a team of top doctors.

Duncan flew to the U.S. on Sept. 19 and exhibited the first symptoms of Ebola four or five days later. For weeks his sister, Mai Wureh, a nurse from Charlotte, N.C., and his mother, who was in Texas when family members spoke to her three weeks ago, had been desperately trying to get Duncan out of Liberia and over to the U.S., fearing for his life.

Wureh told the Associated Press on Wednesday that her brother had clearly told Texas Health Presbyterian Hospital Dallas on his visit to their ER on Sunday that he’d recently arrived from Africa, but due to a miscommunication, no infectious protocols were raised and Duncan was sent home with antibiotics for his fever. It wasn’t until three days later when the family, worried at how sick he’d become, called the Texas Department of Health and alarms were raised, according to CNN.

Duncan has not had an easy time of it in recent years. He spent years in a refugee camp in Ghana during and after Liberia’s civil war, only returning home, “three or four years ago,” according to Rebecca Sele, a cousin of Wureh’s ex-husband, James. Sele, also a nurse who lives in Windsor Mill, MD, kept in touch with Wureh even after her divorce a decade ago.

Sele tells TIME she isn’t sure what kind of visa Eric, as the family calls him, has but “many Liberians try to stay as long as they can, trying to avoid the Ebola. Life is hard there. First civil war, then no jobs, no work. Then Ebola. Mai spends all her time working to send money home. She supports her siblings.”

One of Duncan’s brothers died a couple of years ago and the others have struggled to make ends meet, tinkering with cars and bartering for trade. According to the Times, Duncan worked as a driver for the past year for Safeway Cargo, the Liberian customs clearance agent for FedEx, until he quit abruptly on Sept. 4, soon after a visit from his sister.

This was Duncan’s first trip to the United States, according to Gabriel Wureh, Mai’s ex-husband’s brother, who lives in Bowie, MD. Wureh, who hadn’t spoken to his former sister-in-law in years, got in touch with her on Facebook after the news broke. For Gabriel Wureh, the news hit close to home because he’d just returned from Liberia a month ago himself.

Wureh quarantined himself for 21 days in the family’s home in an abundance of caution, according to his son, Eugene. That said, the accountant said he was never afraid in Liberia and he plans to go back soon to finish his business there. Like Mai, he is trying to help family in Liberia, including Mai’s ex-husband, James, who moved back there eight years ago.

Such is the story for many Liberians living in the U.S., trying to make ends meet and help sustain increasingly desperate relatives back home. “It’s so expensive living here and then you do–she does–nothing but work, work, work to spend money home,” Sele says. “Frankly, I’m worried about Mai, she’s always been a pillar for her brothers and sisters.”

The Dallas County Department of Health has asked Duncan’s family, including Mai, to remain in isolation at an apartment in The Ivy complex in the Fair Oaks area of Dallas for three weeks to ensure that if any of them have caught the disease, they do not pass it to others. The incubation period of the disease is two to 21 days.

“Mai’s afraid to leave her house,” Sele says. “She’s surrounded by reporters. It’s such a tough situation on top of what was already a tough situation.” Making it tougher? If Duncan survives, on Thursday the Liberian government said they would prosecute him for lying on an exit form that asked if he’d come into contact with Ebola patients. 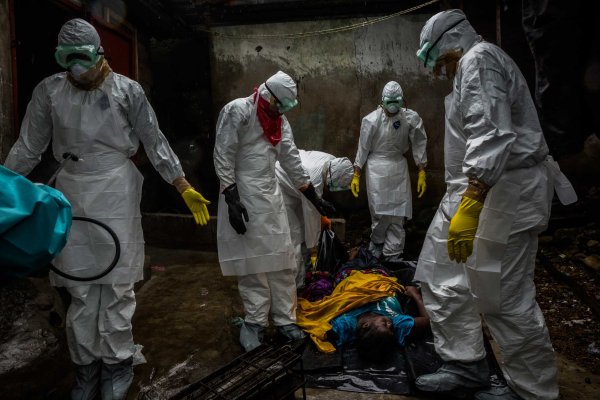 See How a Photographer is Covering Ebola’s Deadly Spread
Next Up: Editor's Pick