A Long Island high school junior died late Wednesday after colliding with an opponent in a varsity football game.

Tom Cutinella, a junior at Shoreham-Wading River High School who plays guard/linebacker on the school’s football team, was pronounced dead after sustaining a head injury in the third quarter of the afternoon game, Newsday reports.

Cutinella was hospitalized after the hit and placed in the intensive-care unit after undergoing surgery. His death came as a shock to the community and to the 60 friends, relatives and teammates waiting in the hospital, Newsday reports.

“We’re a small community and we’re all devastated,” Jack Costas, a member of the Shoreham-Wading River school board told Newsday. “It’s always tragic when someone so young and so full of life has their life ended. It’s going to be a very, very difficult road ahead from this.”

The risks of injury and death in football have come under increasing scrutiny in the wake of tragic deaths of high school football players and growing evidence that the game can have long-term effects on professional players. Two other high school student players have died of potentially football-related injuries since Friday, according to ESPN. 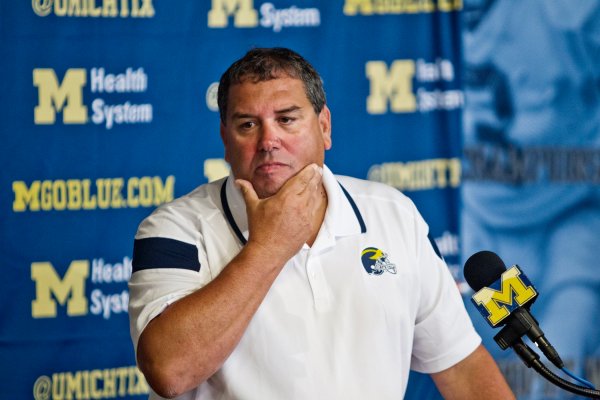 Michigan Coach Under Fire for Sending Dazed QB Back into Game
Next Up: Editor's Pick