Kirsten Gillibrand On Why She Hates the Phrase 'Having It All'

Senator Kirsten Gillibrand (D-N.Y.) hates the phrase “having it all.”

“I think it’s insulting,” she told TIME’s Nancy Gibbs at the Real Simple/TIME Women & Success Panel Wednesday night. “What are you ‘having?’ A party? Another slice of pie?”

“‘All’ implies that a woman staying home with her kids is somehow living a life half-full. What we’re really talking about is doing it all. How do we help women do all the things they want to do?”

Gillibrand knows a thing or two about doing it all. The junior Senator from New York has spent much of her five years in office fighting to address sexual assaults in the military and on college campuses, all while raising two young boys. She opens up about her journey in a new book, Off the Sidelines, which included a bombshell revelation that some of her fellow Senators had made comments about her weight, including the now-infamous “porky” comments. She dedicates a whole chapter in her book to how a hyper-focus on appearance affects women who run for office.

“In my first race, my opponent went after me twice on two different kinds of appearance digs: the first was she’s just a pretty face, meaning I’m far too stupid to be in Congress. And I said ‘thank you,'” she said. “The second one was negative campaign mailers where he used a very unattractive picture of me where I happened to be doing a press conference outside and my hair is waving wildly. And he tints it green, so I looked like this crazy witch with crazy hair and a green face—as if to say ‘how could you possibly trust this woman?'”

“They’ve studied this and they’ve found when [a woman]’s appearance is commented on publicly during a campaign, it undermines her; it actually hurts her,” the Senator said. “And it doesn’t matter if the comment is positive or negative. It undermines her credibility.”

But how did Gillibrand gain the confidence to continue running for office, despite her detractors? She attributes a lot of that bravery to playing competitive sports as a girl. “When you play on a soccer team or a squash team, you lose a lot, so you’re not afraid of being in a competitive situation,” she said. “I all of a sudden realized you can win by losing. When you play a tough match, when you compete, you learn a lot about your opponent.”

She also learned through competitive sports that losing can be “a gift.”

(MORE: Tamron Hall on How Not Getting Jobs Helped Her Succeed)

She added that mentorship helps a lot in navigating those moments when you do fail. She said Hillary Clinton has taken a few moments here and there over the course of her career to guide her in the right direction, and it’s helped her immensely, encouraging audience members to reach out to other young women in a mentorship capacity.

“[Clinton] helped me make the right decisions at the right time,” she said.

But Gillibrand was careful to add that, for her, success wasn’t just about empowering professional women to achieve their goals–it was also about helping poor women. “We have to break the glass ceiling, but we also have to clean the sticky floor,” she said, noting that women are the sole or primary breadwinners in 4 out of 10 American families. “All of these women who are working to provide for their kids also need basic support.”

In order to help those women, the U.S. workforce needs paid family leave, equal pay, and universal pre-K, she said, adding that we’re unlikely to see those advancements until there are more women in Congress. Gillibrand pointed to the debate over contraception as an example of how out-of-touch the mostly-male legislature is with women’s issues, noting that 98% of American women have taken some form of contraception in their lives.

“Basic rights that our mothers and grandmothers successfully fought for are still on the table,” she said. “I can guarantee you that if Congress was 51% women, we wouldn’t be wasting a day on whether women should have affordable contraception. We would be talking about the economy.” 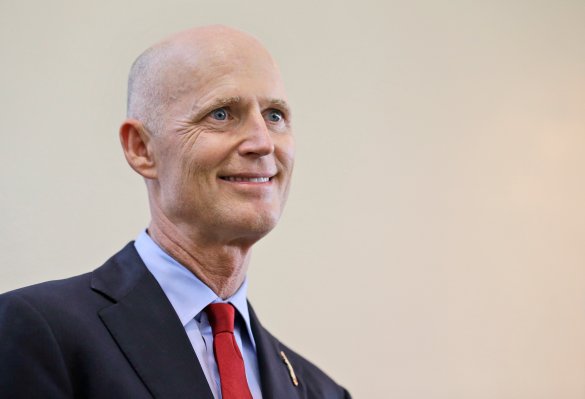 This Is the Most Sexist Republican Ad of the Year
Next Up: Editor's Pick