Wait, the whole stalker thing doesn’t do it for you? You’re not into a guy who hugs a blood-drenched cow carcass while he imagines having sex with you? Well, you’re not alone. RAINN thinks it’s horrible too.

The Rape, Abuse and Incest National Network slammed the video Wednesday for “trivializing” stalking, warning that it could romanticize dangerous behaviors. “Maroon 5’s video for ‘Animals’ is a dangerous depiction of a stalker’s fantasy — and no one should ever confuse the criminal act of stalking with romance,” RAINN VP of Communications Katherine Hull Fliflet said in a statement. “The trivialization of these serious crimes, like stalking, should have no place in the entertainment industry.”

Mixing stalking with romantic pursuit is exactly the problem, and the fact that the girl in question is played by Levine’s real-life wife makes that line even blurrier. Levine and Prinsloo only married in July, which makes the whole bloody-murder-fantasy seem like a perverted newlywed game. And because there’s a real relationship underneath all the fake blood, the video risks making stalking seem like a legitimate or even attractive version of normal courtship behavior.

This isn’t the first time Levine has used violence to talk about love– Maroon 5’s 2010 video ‘Misery‘ featured Levine getting beaten up by a girl in a sort of love-dance. But ‘Animals’ takes that violence to a whole new level.

It’s disturbing to see Levine glamorized in this video as some kind of hopeless romantic, because all his psychopathic behaviors are recast as attractive qualities. Is he supposed to seem tortured and artistic because he has hundreds pictures of this girl that he developed himself in his dark room? Maybe we should think he’s adventurous, because he sneaks into her house to take pictures of her while she sleeps. We can see that he’s fit, because he does all those pull-ups in his meat-hanging room. Plus, he can cook!

Take, for example, the part where Adam Levine stands outside Prinsloo’s window watching her through his psychopath-glasses. There are tons of examples of lovelorn men standing outside a window to signal their devotion– it’s a romantic staple that’s so common it’s become a corny trope. Think of John Cusack in Say Anything, James Van Der Beek in Varsity Blues, Freddy Eynesford Hill in My Fair Lady, Romeo in the balcony scene. But in this video, that’s a violent act, not a romantic one– because Levine has a camera and a meat locker full of bloody carcasses.

But that blurry line is exactly why Levine’s creepy obsession could be easily misinterpreted as adoration. How many impressionable girls are thinking, “I wish Adam Levine loved me enough to break into my house and take pictures of me while I sleep! Why isn’t anyone following me into nightclubs and refusing to back off?” The fact that he was crowned Sexiest Man Alive last year doesn’t help, because even when he’s trying to look creepy, there’s an element of self-conscious hotness.

Adam Levine rolling around in blood and pretending to be a murderous stalker is scary enough. But casting his real-life-wife as his target suggests that this kind of stalkerdom has some place in healthy relationships, like violence is the underside of love. And coming off the summer of domestic violence stories, that’s the last thing anyone needs to see. 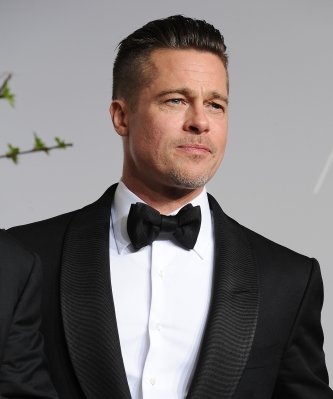 Brad Pitt: "I Want to Spend More Time With My Kids"
Next Up: Editor's Pick