How to Get Away With Hashtags: When Viewers and Networks Collide on Twitter

While viewers watched the twisty and turny premiere of How to Get Away With Murder last Thursday, iPhones in hand, they had many important thoughts to share with the Twitterverse about the newest Shonda Rhimes-produced show to hit primetime. (Like puns, and the realization that a familiar looking actor was Dean Thomas in Harry Potter). But while carefully crafting 140-character commentary, a wave of social media panic came billowing in:

In case you’re counting, which every live tweeter is, #HowToGetAwayWithMurder is a whopping 23 characters long — leaving significantly less room for commentary. And while the acronym #HTGAWM is less cumbersome, “it looks like a mouthful of gobbledygook,” as author and prolific TV tweeter Jennifer Weiner tells TIME.

Twitter has reinvigorated the act of watching live television, and active social viewers want to make sure they are seeing relevant tweets (and that their relevant tweets are being seen) under one, consistent hashtag conversation. But when multiple hashtags are trending: What do you use? Shonda Rhimes tweeted #HowToGetAwayWithMurder; her production company ShondaLand tweeted #HTGAWM; and writer/creator Peter Nowalk sometimes used both! (31 characters!)

“The official hashtag is #HowToGetAwayWithMurder,” ABC Entertainment executive director of digital strategy Ben Blatt says, clarifying confusion for those tuning in to Thursday’s second episode. “Even knowing that it was on the longer side, we felt that it served the purpose of getting people to understand that this was a new show, and we wanted to brand the actual title.”

And it makes sense. Viewers aren’t familiar enough with the product to have a nickname or abbreviation resonate. While HTGAWM is reminiscent of How I Met Your Mother’s now nostalgic HIMYM — that show’s ascent to popularity predated Twitter, so the acronym was getting typed into text messages long before Twitter text boxes.

Blatt notes that even though promo material touts the longer hashtag, ABC went into its marketing decision with the knowledge that it will “probably end up with an abbreviated version” based on online habits.

“We are going to start testing that more, and if we see that fans are using it, we’re going to pivot,” Blatt says. “That’s going to inform what we start doing for weeks two and three.”

Networks have learned to be malleable when it comes to official hashtags. According to Adam Zeller, VP of social media for Bravo and Oxygen Media, while the social, marketing, and editorial team decide based on consensus what official hashtag “feels right” before a new show airs: “Immediately after the premiere we will look at data and decide if it worked — and if not, we will change it to what the fans want to use.”

One of Zeller’s most surprising hashtag changes was for the show The People’s Couch, a reality show where viewers literally watch strangers watching television. (Yes, really). While Bravo decided to use #PeoplesCouch as a hashtag, displaying it on the screen throughout the broadcast, 95% of the audience independently decided to tweet using #ThePeoplesCouch — foregoing three precious characters.

Obviously, the official hashtag on-air and in promotions changed accordingly. A similar shift occurred when fans preferred #RHOM to the original suggested #RHOMIA for Real Housewives of Miami. With Oxygen’s Tuesday premiere of Nail’d It, a show about nail art, Zeller says, the team has flipped between using the branded #NaildIt versus #NailedIt.

“The pros for #NailedIt is that it’s already a huge hashtag on Twitter,” he says, and so the show might get greater discovery by people who happened to stumble on the popular hashtag. For that reason, Oxygen decided to go with the “e” version, reserving the right to change it when people gain more familiarity with the program.

But even though, according to ABC and Bravo/Oxygen, networks want to work with viewers for consistency, hashtags frequently cause chaos online.

During the SyFy’s premiere of Sharknado 2: The Second One — a television event literally created for Twitter — live tweeters were confused because while the the movie itself touted the #Sharknado2 hashtag onscreen during the broadcast, Sharknado’s official twitter account tweeted using #SharknadoTheSecondOne, creating a conflicting trending topic.

As TIME writer Nolan Feeney sarcastically gripes: “It really hurts my #brand.” But seriously, the warring hashtags do prove problematic.

“You want your tweets to be accessible, you want them to be read by people, you want to feel like we’re all watching this together — that’s the whole point,” says Weiner. “But then when you find out that there’s more than one hashtag going on, it’s like, you’re in the club, and you’re having a good time and then you realize that there’s another party going on. And maybe they’re having more fun with it and maybe they’re not. Maybe you should be at that party.”

Weiner primarily faces this dilemma when deciding whether or not to use “The” while livetweeting The Bachelor and The Bachelorette. Although ABC officially pushes #TheBachelor — that’s what’s tweeted by Chris Harrison and written in translucent letters intermittently through broadcasts — a large contingent of #BachelorNation tweets under #Bachelor.

“It’s three characters,” says Weiner, who switches between the two hashtags in spite of the resulting whiplash. “If Michelle Money shows up in a really terrible outfit, you have no room. Sometimes you need every single one of those characters to describe what’s going on and how crazy it is.”

“I think that we do succumb to the reality that fans will sometimes go off on their own,” Blatt says. But even though networks are open to change sometimes, ABC won’t budge on #TheBachelor brand, which has proven successful in spite of discrepancies.

Even if #HowToGetAwayWithMurder shifts to #HTGAWM or something else entirely (ABC probably doesn’t want the #Murder brand), viewers may still face warring trending topics. Official hashtags do not always dictate trends.

“I think that we need to appeal to Twitter,” Weiner says. “Because there is pain going on. People are suffering. People are confused. Let’s fix this. Let’s make it better.” 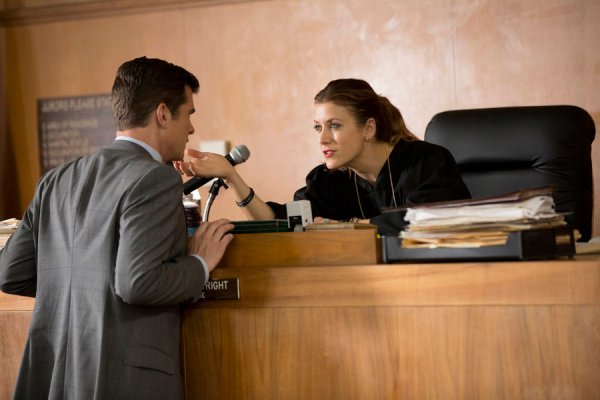 So How Bad Is the Bad Judge in Bad Judge, Really?
Next Up: Editor's Pick