Protesters take part in a rally on a street outside of the Hong Kong government complex in Hong Kong on Sept. 30, 2014
Anthony Kwan—Getty Images
By Elizabeth Barber / Hong Kong

Tens of thousands of pro-democracy demonstrators continued to clog central Hong Kong on Tuesday, as the movement’s leaders vowed to maintain their campaign of civil disobedience until the city’s chief executive (CE) resigns.

In speeches before the teeming crowd in ritzy Admiralty district, leaders of the Hong Kong Federation of Students and Occupy Central threatened to expand the protests if Leung Chun-ying, who holds a position similar to mayor, refuses to step down. “[Leung] is not in control anymore,” Alex Chow, the leader of the students’ federation, told the press.

The groups also raised the possibility of increased labor strikes, in an escalation of their confrontation with the governments of both Beijing and Hong Kong. “The protests are accelerating because the government is doing less and less,” said Chan Kin-man, one of the leaders of Occupy Central, as he addressed the crowd. Behind him lay several umbrellas painted with the phrases popvote and “Join Us.”

The groups on Tuesday also urged their throngs of supporters to continue the sit-in until their demands are met, contradicting an earlier statement by Chan, who had told TIME the previous evening it’s “unrealistic” to expect protesters to continue to occupy key downtown locations for much longer.

Although Chan backtracked Tuesday, the confusion demonstrates the movement is made up of stakeholders with “different interests and aspirations,” says Willy Lam, adjunct professor at the Center for China Studies at the Chinese University of Hong Kong. He cautioned that protesters “cannot afford to fight amongst themselves because they face a very powerful enemy.”

Since British colonial rule ended in 1997, Hong Kong has been run according to the “one country, two systems” principle and enjoys various freedoms and considerable autonomy compared with mainland China. However, many in the Special Administrative Region accuse Beijing of increasingly meddling in the territory’s affairs.

On Wednesday, China celebrates the 65th anniversary of the founding of the People’s Republic. Although this day of pomp is also typically one of popular protest in Hong Kong, the sheer scale of the current demonstration, and intractable nature of its demands, is clearly exacerbating an already strained relationship.

“In China, people think Hong Kong belongs to China. But people in Hong Kong think that Hong Kong is part of China, but belongs to the world,” Julian Lam, a 20-year-old student, tells TIME.

Chao Seng, a 57-year-old private chauffeur, says the Hong Kong government just “wants to polish China’s shoes,” adding that he accepted the governing style of the British and does not approve of Chinese rule. “I’m not from China, I’m from Hong Kong. Every year when they enjoy [National Day], I have no feeling.”

Though protest leaders now say that their principal demand is for Leung to step down, they reiterated that their secondary objective is for Beijing to let Hong Kongers choose their CE by a popular vote in 2017 — and so reversing an Aug. 31 decision by the Chinese Communist Party’s Standing Committee that insisted all candidates must be approved by a committee widely perceived as loyal to Beijing.

“If [Leung] steps down, it will be a big change,” says student Natalie Chan, 26. “The universal suffrage is something we can’t [control] because the Communist Party is very powerful.”

On Tuesday, Leung insisted that he would not resign and that Beijing would not budge in its insistence of vetting future holders of his job. “The central government will not rescind its decision,” he said.

As the protest leaders addressed the crowd Tuesday, with a huge orange banner reading “Can U Hear the People Sing” hanging nearby, thousands of demonstrators in black T-shirts roused from listlessness, ending their naps and putting packages of crackers aside. One group of students popped their laptops closed and put away the schoolwork they’d brought out.

The protests, which began with a student-class walkout last Monday, now represent a mosaic of Hong Kong society. Asked for how long he would support the students, the 65-year-old Eddie Wong replies, “Forever,” adding, “I will be here, I will support this always.”

Numbers swelled after local people grew incensed that police fired 87 tear-gas canisters at protesters on Sunday. “To be honest, I didn’t really support this, since I’m not really into politics,” says university student Stephanie Cheung, 20. “But then I saw how the police reacted to unarmed protesters. Now I’m here fighting against violence and how the government treats people.”

Late Tuesday, the heavens opened and umbrellas, adopted as the symbol of the protests, resumed their usual function — yet the seasonal downpours failed to dampen anyone’s spirits, and the resilient crowds chanted, “We will stay here until the end despite the weather!”

Over the past few days, supplies donated by well-wishers — including water, chocolate cake and bananas — piled in the protest’s multiple hot spots have not dwindled, but grown. Jimmy Lai, a Hong Kong media mogul and frequent critic of Beijing, tells TIME that he does not see the demonstrations ceasing anytime soon. “There’s no compromise for anyone involved,” he says. 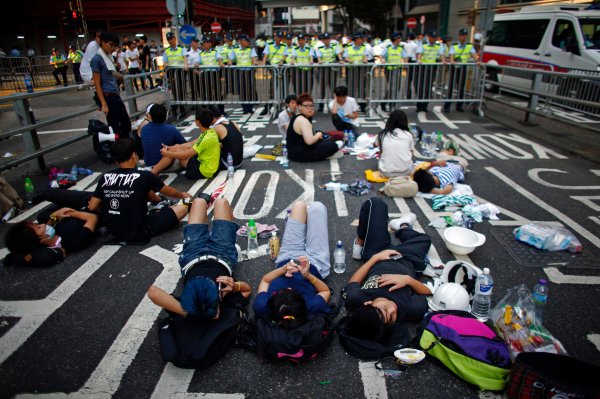 Hong Kong Shows Beijing Exactly What Democracy Can Look Like
Next Up: Editor's Pick