Hong Kong Is Ready for Democracy, but China Isn't Ready for a Free Hong Kong

Police officers face off with pro-democracy protesters in Hong Kong on Sept. 28, 2014
Alex Ogle—AFP/Getty Images
Ideas
By Anson Chan
Anson Chan was a Chief Secretary of the Hong Kong government, both before and after the city's return to Chinese sovereignty in 1997. She is also the founder of the Hong Kong 2020 democracy advocacy group.

For me the most heart-breaking aspect of the current unrest in Hong Kong has been to see our police force, kitted out in full riot gear like Star Wars Stormtroopers with gas masks donned, firing pepper spray and tear gas indiscriminately into the faces of crowds of very young unarmed student protesters, most of whom had their arms in the air to show that they were not holding any weapon. These pictures have shamed our city and its government in front of the whole world.

Hong Kong has a long tradition of peaceful protest, dating back to the outpouring of grief following the 1989 Tiananmen crackdown, and now including annual June 4 candlelight vigils, and pro-democracy marches that take place each year on the July 1 anniversary of the return of sovereignty to China. Hong Kong protesters don’t hurl rocks and Molotov cocktails, they don’t burn tires or set fire to police vehicles, they don’t smash windows and loot shops. Fulfilling their side of the bargain, they have trusted that the police will fulfill theirs by managing the demonstration with a light touch and supporting their right to peaceful demonstration.

In a few short hours last Sunday, our police sacrificed decades of goodwill; their mandate having clearly changed from one of supporting freedom of expression to acting as a tool of an increasingly repressive and authoritarian government that seems committed to rule by law, rather than the rule of law. These sorts of tactics may be par for the course in mainland China; they are totally unacceptable under the policy of “one country, two systems” laid down by the terms of the Sino-British Joint Declaration — the treaty signed by China and Britain that paved the way for Hong Kong to be handed back to Chinese rule in 1997.

As I write, the protest is ongoing. This is no longer just about the Occupy Central movement, which planned to block roads in Hong Kong Island’s main business district. Peaceful sit-ins have spread uptown and across the harbor to Kowloon. The numbers of students are being swelled by supporters of all ages and walks of life.

For the time being, our government seems to have recognized the error of its ways. Riot police have withdrawn and the mood of the crowds is more relaxed.

The question now is, Can trust be repaired? What will it take to defuse the current standoff?

First, the governments in Hong Kong and Beijing must acknowledge that Hong Kong’s people have a right to be angry. Our constitution, the Basic Law, promises that we will have the right to elect our head of government and all members of our legislature by universal suffrage. Yet, 17 years after the return of sovereignty to China, we are still being told that we are not really ready for full democracy. We can have one person, one vote — to elect our next head of government in 2017 — but the two or three candidates allowed to stand for election must all be prescreened by a nominating committee loaded with pro-Beijing sympathizers.

Having waited so long, Hong Kong people are outraged at this insult to their intelligence. Not surprisingly, it is young people, the students, who are most incensed. They can see that Hong Kong is slipping down a perilous slope toward becoming just another Chinese city. This is about their future, the preservation of their way of life and the core values and freedoms they want to be able to pass on to their children and grandchildren.

The truth is Hong Kong is more than ready for democracy; it is China that is not ready for a democratically governed Hong Kong it fears it cannot totally control.

Hong Kong’s government has paved the way for the current crisis by acquiescing in a phony process of public consultation on constitutional reform, the results of which were completely ignored by Beijing. The vast majority of protesters want nothing less than for our current head of government, C.Y. Leung, and his senior ministers, to step down. Realistically, this won’t happen — at least anytime soon. In the meantime, he and his team must come up with something that will give the protesters a reason to pack up and go home. And they must come up with it soon. 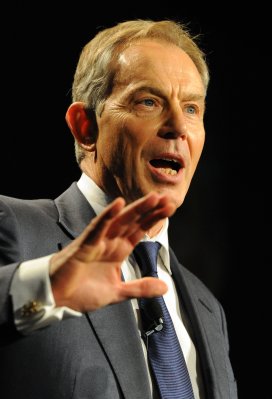 Tony Blair: How We Counter Violent Islamist Extremism
Next Up: Editor's Pick