How to Spot a Trafficking Victim at an Airport

Every time a new horror story about sex trafficking pops up on our radars, about women held for years against their will, or forced to be child brides, or ensnared in a prostitution ring, the same question also surfaces: why didn’t anyone notice anything?

One of the reasons sex trafficking is frequently overlooked is that it’s hiding in plain sight. Victims are not always bundled across borders in cars vans with blacked out windows or transported in shipping containers. Sometimes they’re simply brought in with thousands of other international travelers on an airplane, and forced to service johns at a local hotel.

Law enforcement authorities are beginning to work together with businesses—particularly hotels and airlines—to spot people who are being moved around against their will. While many of their techniques are proprietary, and the companies don’t want to say too much about them, there are a few measures that anyone might use.

(MORE: Inside the Scarily Lucrative Business Model of Human Trafficking)

Delta airline employees are now being trained to ask certain questions at check-in, Letty Ashworth, general manager of global diversity for Delta, told a packed Concordia Summit symposium on human trafficking in New York City on Sept. 29. They’re told to carefully watch for anyone whose documents are not in their own possession. “If for instance you are at a gate and there is an unaccompanied minor, do they know the name of the person they’re traveling with, or where they’re going?” she said.

Crewmembers also watch for unusual activity on a plane, such as when kids don’t answer questions or avoid eye contact when addressed. Other telltale signs might be bruising or other wounds, or a ravenous appetite. (Insert your favorite “you’d have to be starving to eat airline food” joke here. Or actually, don’t.)

Don’t expect trafficking victims to be foreign: 83% of people forced into prostitution in the U.S. are from the U.S. They’re often runaways and sometimes have been at the mercy of their traffickers for so long they see themselves not as women being pimped out for sex but as girlfriends helping their boyfriend pay the bills. “We’ve had women testify on behalf of their abuser, that they loved them and were not there against their will,” even though they had been severely abused, said Manhattan D.A. Cyrus Vance at the event. He’s seen at least one woman tattooed with a barcode by her trafficker, as a mark of ownership.

Vance’s office is also working with hotels to prosecute sex traffickers. One of the big red flags is people who have a pattern of frequently booking a series of hotel rooms on a credit card then paying in cash. Because sex trafficking spikes around the Super Bowl, hotel employees are being asked to be particularly vigilant during that time. And the NFL has been asked to only host the Super Bowl in states that have robust anti-trafficking laws.

The response that trafficking activists are hoping for is similar to the response for suspected acts of terror: “If you see something say something.” Vance is a bit more circumspect. “First people have to decide they care about it,” he said in an interview. “Unless you acknowledge that it happens and are prepared to talk about it it’s not going to change. It all starts at the grass roots. We had 3,500 homeless kids come to New York City last year; they’re a target for traffickers. It has to start from people understanding these aren’t kids in Africa. These are our kids.” 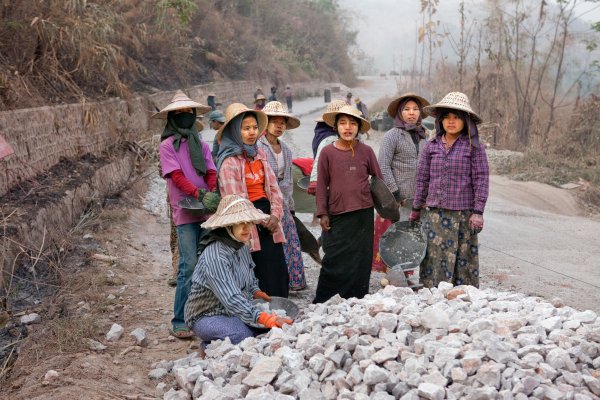 Inside the Scarily Lucrative Business Model of Human Trafficking
Next Up: Editor's Pick