A Medecins Sans Frontieres (MSF) worker is sprayed and disinfected as he leaves a high risk zone of MSF's Ebola isolation and treatment center in Monrovia, Liberia, Sept. 29, 2014.
Jerome Delay—AP
By Jack Linshi

The U.S. Centers for Disease Control and Prevention (CDC) published a report in mid-September estimating that if current trends in the Ebola outbreak continue without a ramped up effort, then Ebola cases in West Africa would double every 20 days. In that situation, Ebola cases could reach up 1.4 million by January.

It’s a worst-case scenario estimate, but that’s only one caveat behind the 1.4 million figure, which remains muddled by research limitations and assumptions. While health experts and a CDC official told TIME that it’s common in public health surveillance projects to report overestimates, the fact that this is the worst Ebola outbreak in history adds additional levels of uncertainty in forecasting an unprecedented epidemic.

“Underreporting is always an issue with communicable diseases,” says Thomas Gift, an economist at the CDC. “We believe the actual incidence of disease is higher than what shows up in case reports.”

In West Africa, a lack of on-the-ground healthcare resources has meant that many Ebola patients haven’t been treated by doctors, or, in some instances, they have been turned away by doctors, which has resulted in an incomplete headcount of afflicted people.

“It’s always difficult with these models to try to capture what’s really going on on the ground,” says Dr. Eden Wells, an epidemiology professor at the University of Michigan. “Given the data they used, it’s the best projection they could get at the time.”

The projections were based on data from only one day in only one country—Liberia—Gift said. Researchers used a model to predict the number of beds in use in Liberia on Aug. 28, 2014—the occupied beds were a measure of reported cases. They then surveyed experts at Ebola treatment clinics in Liberia to estimate the actual number of beds in use, weighing that estimate by the proportion of those who stay at home (and are therefore “unreported” cases) who eventually arrive in hospitals: a measure of both reported and unreported cases.

Gift added that while on-the-ground conditions made it difficult to collect more frequent data, there was also an urgency in releasing information about the outbreak. “Why didn’t [researchers] do more to get a range of confidence? Partially because this was designed to provide a tool to be used by people to assess the potential impact of intervention while the outbreak is going on,” Gift says.

3. The projection, based on a slice of data from Liberia, was applied to all of West Africa.

Liberia has been the most hard-hit country in the Ebola outbreak, with more than 1,800 deaths and 3,400 confirmed cases, according to the CDC. Sierra Leone and Guinea have suffered significant death tolls as well, though far fewer than Liberia. “Notable regional differences in underreporting might mean that using one [assumption] across an entire country is inappropriate,” the report said. This could, in theory, result in an overestimate.

“The 2.5 correction factor”—meaning that for every one reported case, there are potentially 1.5 unreported cases, according to the CDC’s modeling—”seems to have been correct for that day,” Gift says. “But [that] might change over time.”

Still, the fact that an Ebola outbreak has never been this widespread—and thus never modeled so extensively—allows the study some liberty in deciding its parameters, the report said.

“The purpose is to show that this epidemic was not going to show signs of peaking on its own. In historic outbreaks, there were a few hundred cases, and the epidemic diminished. That didn’t happen this time,” Gift says.

4. Much of the data coming from West Africa is likely inaccurate or incomplete.

A recent World Health Organization report said that in Liberia, “data were being reported from 4 different and uncoordinated streams, resulting in several overlaps and duplicated numbers.” The report added that many deaths were not being properly documented.

Last week, the New York Times similarly reported a discrepancy between the number of reported deaths in Sierra Leone and the number of buried victims, a fact that further complicates researchers’ efforts to measure Ebola’s true impact.

5. Projecting all the way to January is difficult.

“It’s a bit like weather prediction,” says Marisa Eisenberg, an epidemiology professor at the University of Michigan. “There’s a lot more uncertainty if you’re going all the way out to January versus the end of October.”

The obvious difficulty is that the report is based on the assumption of no significant additional intervention, which, with each passing week, is changing. A shorter-term projection of Ebola cases was provided by the WHO in a report published last week in the New England Journal of Medicine. The projection’s limited time span indicates a more realistic prediction of Ebola cases, even though it also assumes “no change in the control measures for this epidemic.” If Ebola cases were to double every 20 days without additional measures, as the CDC reported, then the WHO’s estimate indicates that there will be about 150,000 cases by January, a markedly more conservative figure.

Still, experts believe there is value in examining the CDC’s “worst-case scenario” of 1.4 million cases. Overestimation offers a safety net in ensuring adequate assistance is provided. If anything, it also adds an urgency to prove wrong the study’s chilling caveat: that this is what could happen if no additional resources are used to battle the deadly disease.

“[The researchers] are trying to cover their bases, and make sure they don’t under-deploy resources,” Eisenberg says. “If you’re going to be wrong in one direction or the other, it’s better safe than sorry.” 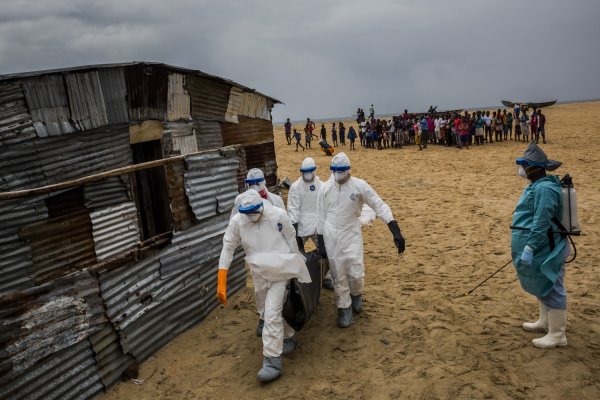