Mandatory Palestine: What It Was and Why It Matters 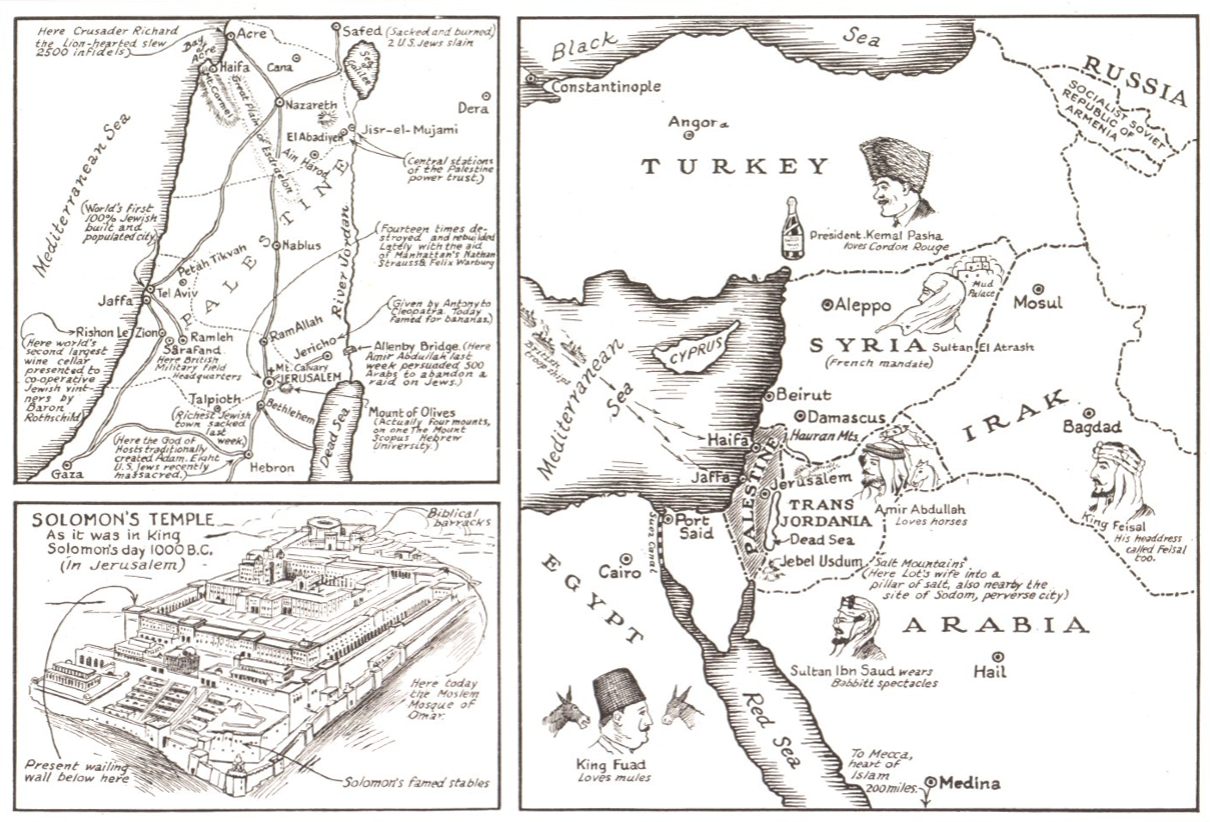 The map above is from a 1929 TIME article titled “Islam vs. Israel”—even though, as the map makes clear, in 1929 there was no country called Israel. (On a desktop, roll over to zoom; on a mobile device, click.)

Instead, there was Mandatory Palestine. The idea of a mandatory nation, using the common definition of the word, is an odd one: a country that’s obligatory, something that can’t be missed without fear of consequence. But the entity known as “Mandatory Palestine” existed for more than two decades—and, despite its strange-sounding name, had geopolitical consequences that can still be felt today.

The word “mandatory,” in this case, refers not to necessity but to the fact that a mandate caused it to exist. That document, the British Mandate for Palestine, was drawn up in 1920 and came into effect on this day in 1923, Sept. 29. Issued by the League of Nations, the Mandate formalized British rule over parts of the Levant (the region that comprises countries to the east of the Mediterranean), as part of the League’s goal of administrating the region’s formerly Ottoman nations “until such time as they are able to stand alone.” The Mandate also gave Britain the responsibility for creating a Jewish national homeland in the region.

The Mandate did not itself redraw borders—following the end of World War I, the European and regional powers had divvied up the former Ottoman Empire, with Britain acquiring what were then known as Mesopotamia (modern day Iraq) and Palestine (modern day Israel, Palestine and Jordan)—nor did it by any means prompt the drive to build a Jewish state in Palestine. Zionism, the movement to create a Jewish homeland, had emerged in the late 19th century, though it wasn’t exclusively focused on a homeland in Palestine. (Uganda was one of several alternatives proposed over the years.) In 1917, years before the Mandate was issued, the British government had formalized its support for a Jewish state in a public letter from Foreign Secretary Arthur James Balfour known as the Balfour Declaration.

But by endorsing British control of the region with specific conditions, the League of Nations did help lay the groundwork for the modern Jewish state—and for the tensions between Jews and Arabs in the region that would persist for decades more. Though Israel would not exist for years to come, Jewish migrants flowed from Europe to Mandatory Palestine and formal Jewish institutions began to take shape amid a sometimes violent push to finalize the creation of a Jewish state. Meanwhile, the growing Jewish population exacerbated tensions with the Arab community and fueled conflicting Arab nationalist movements.

TIME reported on some of the tensions in the 1929 article from which the map above is drawn:

The clashes in Mandatory Palestine, which at times targeted the British or forced British intervention, began to take a toll on U.K. support for the Mandate. As early as 1929, some newspapers were declaring “Let Us Get Out of Palestine,” as TIME reported in the article on Jewish-Arab tensions. Though the Mandate persisted through World War II, support in war-weary Britain withered further. The U.K. granted Jordan independence in 1946 and declared that it would terminate its Mandate in Palestine on May 14, 1948. It left the “Question of Palestine” to the newly formed United Nations, which drafted a Plan of Partition that was approved by the U.N. General Assembly—but rejected by most of the Arab world—on Nov. 27, 1947.

As the day of May 14 came to an end, so did Mandatory Palestine. The region was far from settled, but the Mandate did accomplish at least one of its stated goals. Mere hours earlier, a new document had been issued: the Israeli Declaration of Independence.

Read a 1930 cover story about the Zionist movement during the period of Mandatory Palestine: Religion: Zionists