Office workers walk through closed off streets in front of protesters near the central government offices in the business district of Central in Hong Kong on Sept. 29, 2014
Bloomberg—Getty Images
By David Stout

The Hong Kong Confederation of Trade Unions (HKCTU) has called for a strike Tuesday in support of the city’s snowballing democracy protests.

The call came after the city’s largest teachers’ union, the Hong Kong Professional Teachers’ Union (HKPTU), declared a strike in response to police’s forceful crackdown on demonstrators on Sunday.

“Hong Kong police used ruthless force to expel harmless citizens, inflicting injuries on demonstrators with the use of weapons, acting as enemies of the people,” read a statement released by HKPTU.

On Monday, education officials expressed their “deepest regret over the Professional Teachers’ Union initiation of a class and teaching boycott.”

The union’s decision to strike comes a week after student protest groups walked out of classes in response to Beijing’s decision last month to implement restrictive elections for the position of Chief Executive, the city’s highest office, in 2017.

“HKCTU calls for all workers in Hong Kong to strike tomorrow, in protest of the ruling of the National People’s Congress, as well as the brutal suppression of peaceful protest by the Hong Kong government,” said the group. “Workers and students must unite to force the totalitarian government to hand state power back to the people.”

The South China Morning Post reported on Monday that about “80 to 100” delivery staff from the local Coca-Cola distributor had also gone on strike in support of democracy. Spontaneous strikes for political causes are extremely rare in Hong Kong. Also unusually, the company told the Post that it had “expressed understanding about the action.”

Analysts say that the further use of heavy-handed force by the police will broaden the support base for the protesters.

“People saw what happened with the protests and the violence used by the people and most of the public are very angry,” Mabel Au, director of Amnesty International Hong Kong, tells TIME. “That’s why the trade unions came out and called for a strike.” 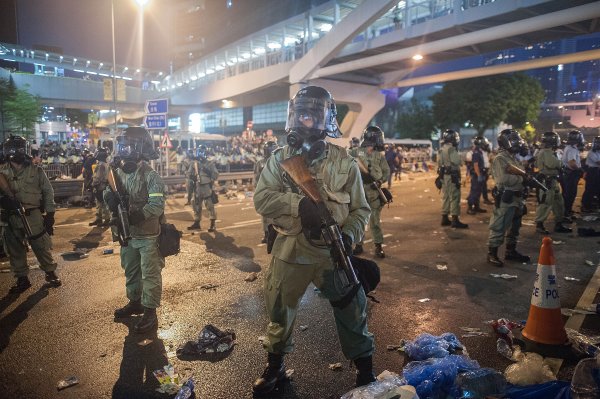