Hong Kong Braces Itself for Another Night of Pro-Democracy Protests

As the sun rose Monday morning, dispelling the clouds of tear gas, one of the world’s great cities found itself in partial lockdown.

Hong Kong’s normally gridlocked thoroughfares became deserted concrete canyons as pro-democracy demonstrators continued their occupation of the Admiralty and Causeway Bay districts on Hong Kong Island, and of a key intersection in Kowloon — on the other side of a world-famous harbor that glittered in the sun of early fall.

With a speed that seemed to surprise protesters and government alike, what started six days ago as a student-led class boycott has now become a full-scale showdown between tens of thousands of pro-democracy demonstrators and the police.

Many of those protesters are part of the Occupy Central movement — a group naming itself after its goal of shutting down the city’s main business area. The name is now obsolete: as protest sites spread and more people join, Occupy Central has become Occupy Hong Kong.

“We have been waiting for so many years,” said one protester, Raymond Chow, 45. “And now that we’ve started, we will not stop.”

On Monday morning at the upper reaches of Nathan Road — Kowloon’s main artery — all traffic had halted. Buses and cars stood where their drivers had abandoned them the previous evening. Dozens of black-clad students and other protesters lay sprawled across the road listening to speeches.

A young girl moved through the crowd offering breakfasts of bread rolls while a human chain formed to move bottles of water, donated by the public, from a collection point two blocks away, right up to the front line.

Last night’s barricades still stretched across the road and, eerily, not a single police officer could be seen. One of the world’s busiest shopping quarters had completely fallen to the forces of democratic revolution.

That is exactly what Beijing fears. Oct. 1 marks the 65th anniversary of the People’s Republic of China, and 65 years of Chinese Communist Party rule. In the CCP’s narrative, Hong Kong has been assigned the role of prodigal city: seized at gunpoint by rapacious opium traders, and subject to British rule for 156 years, before being returned to the fulsome embrace of Chinese sovereignty.

Or so the story is meant to go. Instead, since Hong Kong’s return to China in 1997, its people have been singularly truculent, disagreeing with their new overlords over everything from national-security legislation to school curricula and the pace of political reform.

The latest protests erupted when Beijing rejected demands — shared by many in this sophisticated and highly educated community — that Hong Kong’s highest officeholder, the Chief Executive, be directly elected from candidates nominated by the city’s 3.5 million eligible voters and not chosen by an election committee composed of oligarchs and pro-Beijing figures.

In retrospect, Beijing may come to regret its decision to refuse its most cosmopolitan city even this modicum of democracy. By late Sunday, what had been a largely peaceful face-off degenerated into scenes of violence, as the police fired successive rounds of tear gas into crowds gathering along Connaught Road by City Hall, right in the seat of the city’s power. Tear-gas canisters bounced off the walls of the exclusive Hong Kong Club as defiant protesters faced riot police.

In Causeway Bay, home to some of the world’s most expensive retail premises, thousands of others waited long into the night. As volunteers distributed water and crackers, young people talked politics and watched for updates on their phones. “We are fighting for a fair democracy and supporting our students,” said Kusa Yeung, a 24-year-old copywriter, handing water to exhausted peers. “We are not afraid of the Chinese government.”

Protesters were still on the streets this morning, and their numbers have been building steadily throughout the day. By Monday afternoon, thousands were swarming along Queensway, home to government offices and the city’s High Court, ready for another night of confrontation with the police.

If the police repeat last night’s tear-gassing and pepper spraying, there could be many more Hong Kongers on the streets tomorrow. 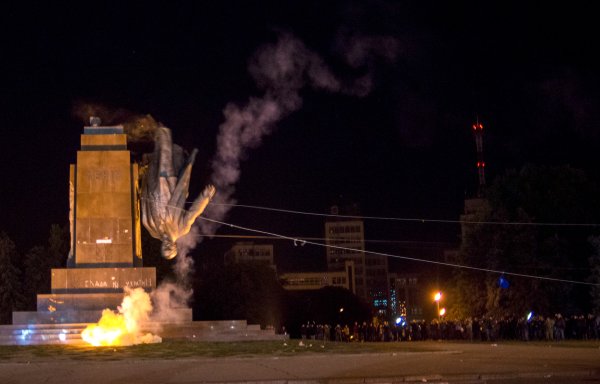