Prime Minister Narendra Modi of India waves to the crowd as he arrives to give a speech during a reception by the Indian community in honor of his visit to the United States at Madison Square Garden, Sept. 28, 2014, in New York.
Jason DeCrow—AP
By Nikhil Kumar

Until this weekend, India’s Prime Minister Narendra Modi had one thing in common with Eric Prydz, the Swedish DJ and electronic dance music star known for his elaborate concerts. Prydz’s shows are audiovisual extravaganzas complete with pulsating lasers, animations and three-dimensional holograms, including one of the man himself. Modi, too, has experience with digital doppelgängers: during the Indian national election in which his Bharatiya Janata Party (BJP) eventually won a large majority, the 64-year-old used the latest in high-tech wizardry to deploy holograms of himself at simultaneous rallies around the country.

Now, Prydz and the Prime Minister have two things in common.

On Sunday morning, hours after the Swedish DJ finished playing an extended set at New York City’s Madison Square Garden, lines began forming along 31st Street and up 7th Avenue for the next big act at the venue: a “community reception” for Modi, who like Prydz, made his debut at the famed arena this weekend.

Thousands of Indian Americans turned out to cheer the visiting leader, almost filling the giant hall to capacity. Over 18,000 people had been assigned free tickets via a lottery, after more than 30,000 applied to attend. Inside, as the crowd settled in, big screens above the stage flashed stylized portraits of Modi looking out into the far distance that resembled Shepard Fairey’s 2008 “Hope” poster of Barack Obama. Many in the audience wore T-shirts bearing the same image. Accompanying the crowd was a contingent of American lawmakers: New Jersey Democrat and Senate Foreign Relations Committee chair Senator Bob Menendez was there, along with over three dozen congressional colleagues, and also the Indian-American Republican governor of South Carolina, Nikki Haley.

Organized by a newly established group called the Indian American Community Foundation, the whole affair had the feel of an election rally or party convention — so much so that, at one stage, as the crowd anticipated the Prime Minister’s arrival by chanting his name, one of the M.C.s light-heartedly reminded the audience that Modi had already been elected.

His entrance after a series of musical and dance warm-up acts sent the audience into a frenzy. In his speech, delivered from a rotating platform, Modi reiterated his campaign promises to fix India’s ailing economy and announced measures to simplify visa procedures for foreigners of Indian descent. “Since taking over, I haven’t even taken a 15-minute vacation,” he said, drawing yet more cheers.

It was a date nearly 10 years in the making. In 2005, Modi, then chief minister of the western Indian state of Gujarat, was preparing to travel to the U.S. to address Indian Americans from the same New York stage, when the Bush Administration slammed the door shut in his face. The U.S. denied him a diplomatic visa and yanked his existing nondiplomatic visa under a law barring entry to any foreign government official “who was responsible for or directly carried out, at any time, particularly severe violations of religious freedom,” pointing to the bloody sectarian rioting in Gujarat on his watch in 2002. His absence at the Madison Square Garden event was marked with an empty chair on the podium

But then, in May this year, the BJP forcefully shoved a Congress Party–led coalition off the seat of power in Delhi. General elections gave the Hindu nationalists the biggest single-party parliamentary majority in three decades, a feat that firmly established Modi as the biggest beast on the national scene. The Congress, blamed for a raft of high-profile corruption scandals and for steering the economy into a ditch, was consigned to the political undergrowth. An invitation to the White House soon followed — Modi heads to Washington, D.C., on Monday — and the visa ban was conveniently forgotten.

And so, quite apart from what it means for Indo-U.S. ties, this week’s visit marks “the culmination of the re-imagination of Narendra Modi, from someone who was denied entry onto U.S. soil to a leader who is being feted by the New York and Washington, D.C., establishment,” says Milan Vaishnav, an associate with the South Asia Program at the Carnegie Endowment for International Peace.

The size of the Madison Square Garden rally might also prove politically useful as Modi meets President Barack Obama, says Vaishnav. “It’s a politically savvy move. It sends the message that, in addition to a very large support base back home, Modi also has supporters in the U.S. It says to the American government, Look, I have a constituency among your voters, not just mine.”

But the hype and excitement isn’t just about Modi, says Devesh Kapur, the director of the Center for the Advanced Study of India at the University of Pennsylvania. “It’s a signal from the Indian-American community that it has ‘arrived.’ There’s a part of it which is about Modi, the rock-star politician. But it’s also a signal by the community to the politicians here in the U.S. to take them seriously.”

Not that everyone is celebrating Modi’s visit. While the audience inside cheered and applauded him, a small group of protesters outside Madison Square Garden on Sunday chanted anti-Modi slogans, questioning his record on religious minorities. And last week, shortly before he touched down in the U.S., a New York court issued a summons for him to respond to a lawsuit accusing him of rights abuses connected to the 2002 Gujarat riots. Though officials from both India and the U.S. stressed that he had immunity as a visiting head of government, the summons was an awkward reminder of Modi’s controversial past as the White House prepared to roll out the red carpet for the new Indian leader. 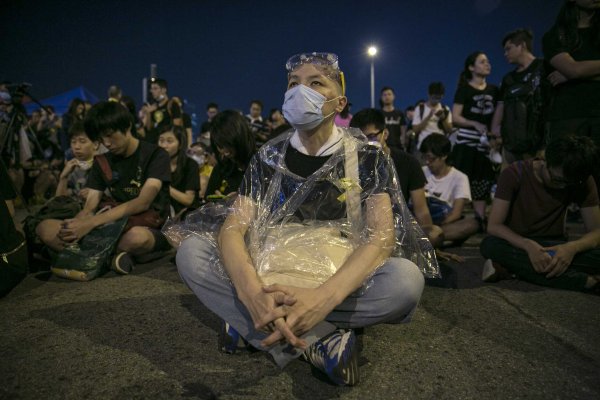