The Simpsons Kills Off Krusty's Dad in Season Premiere

Fans of The Simpsons will be sitting shiva tonight for Rabbi Hyman Krustofski, father of chain-smoking children’s entertainer Krusty the Clown and the first fatality of the show’s 26th season.

Voiced by comedian Jackie Mason, Pa Krusty died on Sept. 29. He was born and raised in the Lower East Side of Springfield, where he became “the most respected man” in the community. It was there that he raised a son, Herschel.

Rabbi Krustofski intended for his son to become a rabbi like himself and Herschel’s grandfather, but the boy’s desire to become a clown came between the two. Herschel grew up to become Krusty the Clown, a figure of joy to kids in the town of Springfield (State Still TBD) and beyond. But the Krustofskis were estranged for many years, and only reunited with the help of a couple local children: Bart and Lisa Simpson.

Late in life, Krustofski reunited with his son again when Krusty decided to finally have his Bar Mitzvah. But the rabbi was again disappointed by his son when, after Hyman taught his son about Judaism, Krusty decision to televise the event, in a comeback bid after his show was canceled.

Although “Krusty the Klown’s Wet ‘n’ Wild Bar Mitzvah” was a hit, it again damaged relations between the pair. But Krusty finally decided to have a second, more traditional Bar Mitzvah at a Jewish temple, to the delight of his father. The rabbi was also due to preside over his son’s 15th wedding, to “Princess Penelope,” until Krusty ditched her at the altar.

Rabbi Krustofski’s fate had been in question ever since Simpsons producer Al Jean said during a publicity tour last year that a character would meet his maker in the season opener. “I’ll give you a clue that the actor playing the character won an Emmy for playing that character, but I won’t say who it is,” he said. Mason won the award for playing the role of Krustofski in 1992.

Krustofski is not the first semi-regular character to die in the otherwise ageless universe of The Simpsons. He will join Maude Flanders, Bleeding Gums Murphy, Mona Simpson (Homer’s mom), Amber Simpson (Homer’s Las Vegas wife), and Edna Krabappel in the Springfield graveyard. 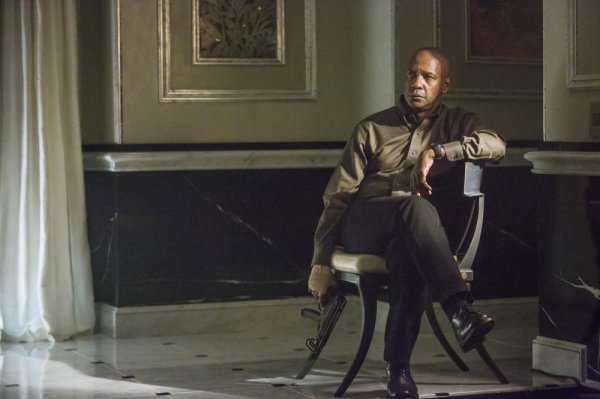 Denzel Levels Box Office Competition With The Equalizer
Next Up: Editor's Pick