Russia's President Vladimir Putin signs a law on ratification of a treaty making Crimea part of Russia, during a ceremony in the Kremlin in Moscow March 21, 2014.
Mikhail Klimentyev—AFP/Getty Images
By Noah Rayman

Russia will allow international monitors into Ukraine amid concerns from Western countries that Russia might make a grab at more territory after it annexed the southern Crimea peninsula.

The Vienna-based Organization for Security and Cooperation in Europe said Friday that 100 monitors will initially be sent to Ukraine, Bloomberg News reports. But monitors will not be allowed into Crimea, which Russia said is now part of its territory.

Russia’s acquiescence could help cool international tensions after its annexation of Crimea, finalized Friday, spawned a tit-for-tat exchange of sanctions between the United States and European Union, and Russia.

“It is a pity that the European Council took a decision that is divorced from reality,” he said. “We believe that it is time to return to pragmatic areas of cooperation that serve the interests of our countries. However, it should be understood that Russia reserves the right to give an adequate response to these actions.”

President Vladimir Putin signaled on Friday that he wouldn’t escalate the war of sanctions between Russia and the U.S., reports the New York Times, though he did joke in televised remarks that he would open an account at a Russian bank sanctioned by the U.S.

Meanwhile, Russia tightened its grip on Crimea. The Ukrainian defense ministry said Saturday that pro-Russian forces stormed another military base in Crimea on Saturday, driving out Ukrainian soldiers who threw smoke bombs as they departed. 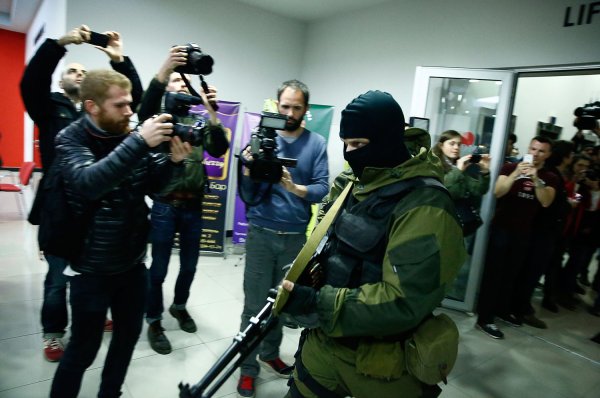