It seems like any typical Friday night in Monrovia. Out on the streets traffic snarls around the intersections, and taxis and buses are crammed with commuters on their way home after a long week. The ubiquitous sidewalk video bars are filing with patrons settling in to watch European club football on open air screens (Chelsea and Barcelona are favorites here), and the base is starting to thump at Code: 146, the Liberian capital’s hottest live music club. Blake, the house DJ, is priming the audience with promises of a new band. Then he opens with an unusual mike check for a bar known best for getting down: “Let’s get started, but let’s respect the rules. So no too much rubbing, no too much hugging, no too much sweating, no too much drinking. You have to be cautious.”

At first glance it’s hard to tell that Monrovia is the epicenter of an Ebola outbreak that has killed nearly 3,000 people and sickened thousands more in the West African nations of Liberia, Sierra Leone and Guinea. But a closer look reveals what Ebola has wrought. No one shakes hands any more, and the shared taxis, which used to careen around town with as many as five passengers stuffed in the back, are only allowed three, by a new government decree. Public buses are limited to four passengers per row. The video bars, which used to cram as many as 12 football fans to a bench for the big games, are stopping at eight. And at Code: 146 the smell of old beer and fresh marijuana is nearly masked by the pervasive scent of chlorine emanating from a hand washing station placed prominently near the dance floor. “Ebola is real,” Blake shouts over the microphone, as he launches into a rap about a guy who called it a myth. “And now he’s dead.”

Not exactly the most uplifting way to launch into an evening of dance and revelry, but, says the bar’s owner Takun J, “We have a responsibility as musicians to spread the message about Ebola.” Takun J is one of the country’s most well known singers, his style a reggae-tinged Liberian hip-hop dubbed Hipco. He is working on a new song about Ebola, and hums a few refrains as he gets ready for the evening show. “Musicians have the ear of the people,” he says. “Everyone loves Takun J, so when I talk about Ebola, everyone knows it’s serious.” He pauses for a moment, then grins. “They will listen to me more than to the President.”

Takun’s efforts, along with a widespread education campaign conducted by various NGOs, seem to be having an impact. “When the crisis first started, I would say 30% took Ebola seriously and 70% of the people didn’t believe it was real,” says Matthew G. Slermien, head of a teenage empowerment program in the Monrovia slum of Westpoint. “Now those numbers are reversed.” Slermien’s project, Adolescents Leading Intensive Fight Against Ebola (ALIFE), has trained 142 young women and men to go through the community educating residents about Ebola and how to protect themselves.

“People are starting to listen,” says ALIFE volunteer Hazel Toe. It’s not perfect—the organization doesn’t have the money to distribute chlorine or buckets or gloves to the slum dwellers who can’t buy their own—but it’s a start, she says. “Once people start listening, the rest will follow.” That’s what DJ Blake and Takun J are hoping as well. 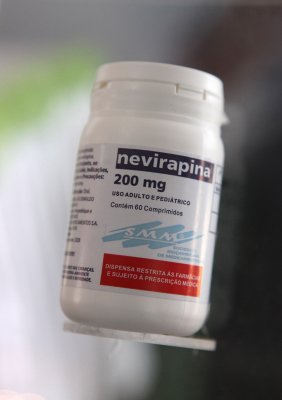 Half of HIV-Positive Gay Men Don't Take Life-Saving Drugs
Next Up: Editor's Pick