Rand Paul: America Is in a Full-Blown Spiritual Crisis

America is not just experiencing growing pains. America is in a full-blown crisis — a spiritual crisis.

Soothing voices seek to reassure us that everything is OK. Everything is just fine. All is well. All is well until… Until one day all is not well. The problem, as Os Guinness puts it, is not wolves at the door but termites in the floor. Our foundation is cracking. It’s not that we’ve chosen the wrong politicians. It’s more fundamental than that.

Guinness makes this point. When he states that: “The only proper restraint to freedom is self-restraint.”

What does that mean? It means that those who love freedom must realize that freedom is not a license to do as you please, freedom can only be realized when citizens know self restraint, or put another way — virtue. This parallels George Washington’s belief that democracy requires a virtuous people. Laws don’t really restrain people. Ninety-eight percent of people follow a virtuous course with or without laws. This is not an argument against laws but an argument that laws alone are not enough to civilize a nation.

Two hundred years ago Thomas Paine wrote, “These are the times that try men’s souls.” The question is now as important as it was then, will you be “sunshine patriots” shrinking and gone when the going gets tough or will you stand, shoulder to shoulder to defend the Republic!

As your representative, I swore an oath to defend the Republic against enemies foreign and domestic. Now that I’ve been to Washington and seen the belly of the beast, I can tell you that I’ve met the enemy and the enemy is too often right here in this town.

In the White House. In Congress. In both parties.

In bipartisan fashion, Congress defies its own rules on publishing bills online in advance of votes.

The President acts as if he were a king. He ignores the Constitution. He arrogantly says, “If Congress will not act, then I must.” These are not the words of a great leader. These words sound more like the exclamations of an autocrat.

In the face of war, the President is just as arrogant. Instead of coming to Congress, he illegally acts on his own.

We are faced with a crisis in the Middle East that does require action. While I am one who is hesitant to involve us in their civil wars, ISIS is now a threat to our consulate in Erbil and possibly to our embassy in Baghdad.

We must act but we should act within the rule of law. The Constitution states that only Congress may declare war, yet this President has, in Libya, and then again this week in Syria, committed our sons and daughters to a war that is not authorized by Congress.

Had I been President, I would have called for a joint session of Congress, laid out the threat, and requested Congressional authority to respond. By failing to follow the Constitution this President missed a chance to unite the nation. He missed a chance to galvanize the country. He missed the chance to become a great American leader.

How did we stray so far from the Constitution? And how do we find our way back to the traditions of our founders?

Don Devine writes of how Freedom and Tradition are intertwined: “Freedom needs tradition for law, order, and inspiration. Tradition needs freedom to escape stagnation, coercion, and decline. The great achievement of the Constitution’s framers was in providing a means for synthesizing freedom and tradition.”

Mother Teresa was once praised for her social work in India. She replied, “We are not social workers. We do this for Jesus.” No secular government, no social worker can claim the same motivation. No government, no law, can force a people to be virtuous. Our churches, schools and parents must fill that void.

This is not the norm right now. Speaking of a revival, speaking of our values, is sadly considered nonconformity in this day and age.

In other words, we must do something that our world often tells us not to do: Seek God.

Walker Percy laments in “The Moviegoer” that we’ve left no room for the seeker. Maybe, our country’s revival depends on seeking and re-discovering the synthesis of freedom and tradition.

Some seem to believe you must choose either liberty or virtue — that to be virtuous you can’t have too much liberty. That is exactly wrong. Liberty is absolutely essential to virtue. It is our freedom to make individual choices that allows us to be virtuous. Government cannot impose virtue, we must impose it on ourselves.

Obamacare tries to force us to separate our faith from our business. Fortunately, The Supreme Court thought otherwise.

Reagan understood this unity of message when he wrote: “We do not have a separate social agenda, separate economic agenda, and a separate foreign agenda. We have one agenda, just as surely as we seek to put our financial house in order and rebuild our nation’s defenses, so too, we seek to protect the unborn, to end the manipulation of schoolchildren by utopian planners and permit the acknowledgement of a Supreme Being in our classrooms.”

As Christians, we should always stand with the most defenseless. I believe that no civilization can long endure that does not respect life from those not yet born to life’s last breath.

The debate isn’t really about whether government has a role in protecting life. The debate really hinges on when life begins. I’ve held one and a half pound babies in my hand. I’ve seen them sucking their thumb on ultrasound and I’ve seen surgeons operate on babies still in the womb. So don’t tell me that five and six pound babies have no rights simply because they are not yet born. I am one who will march for Life and will continue to stand up in defense of life as long as I am privileged to be in office.

Another way we as Christians should stand up to the current status quo is in foreign policy. Reagan in his first speech to the UN said: “The record of history is clear: citizens of the US resort to force reluctantly and only when they must.” Reagan believed in strength, but also peace. He said: “As for the enemies of freedom, they will be reminded that peace is the highest aspiration of the American people.”

Our foreign policy, though, has too often accepted war instead of peace, and intervention instead of strength, leading to a host of unintended consequences. Toppling secular dictators in the Middle East led time and time again to chaos and ultimately that chaos enabled and abetted the rise of Radical Islam. As secular dictators fell in Libya, Egypt, Iraq, and now Syria, radical jihadists exploited the vacuum and Christians have been forced to flee. Where will the Syrian Christians go when the civil war breaks down their door?

Across the Middle East, the story is the same. Christians are either persecuted or on the run. In Sudan, Meriam Ibrahim is on the run. She is a Christian. For her beliefs she was sentenced to death by the Muslim courts of Sudan. Meriam was raised by a Christian mother and married a Christian man. At the time of her arrest, she had a young son and was pregnant. Because Meriam’s father was Muslim, Islamic law considers Meriam and her son to be Muslim. So when she was arrested, Meriam and her young son were taken and kept in prison. Meriam was forced to give birth in prison, shackled to the floor. When Meriam’s Muslim brother was asked about her sentence, he replied: “If she repents and returns to our Islamic faith, then we are her family. But if she refuses she should be executed.”

After her conviction, Meriam was given a chance to recant her Christianity and save her life. She refused, declaring: “I am a Christian and I will remain a Christian.” Luckily, Meriam was granted asylum and in August she was allowed to come to the United States. But there are more like her.

In Libya, once the secular dictator Muammar Gadaffi fell, radical jihadists raided Christian churches rounding up over a hundred Christians accusing them of being missionaries because they possessed Bibles and crosses. Many were tortured and one Christian died while being tortured.

In Pakistan, Asia Bibi, a Christian, sits on death row for blasphemy. She says it all began when she drew water from a Muslim villager’s well. As she was filling her bowl of water, a crowd formed chanting, “Death! Death to the Christian!” She pleaded for her life. She was pelted with stones, punched in the face and drug through the streets. The local Imam finally intervened only to say, “If you don’t want to die, you must convert to Islam.” The crowd descended on her again beating her with sticks. Finally, the police stopped the attackers only to arrest her. For several years now, Asia Bibi has been on death row for the alleged crime of blasphemy.

Until Asia Bibi is freed, Pakistan should not receive a penny of U.S. aid! Not one penny should go to any nation that persecutes or kills Christians!

You would think your representatives would get that message but they don’t. This summer I introduced legislation to stop foreign aid to any country that gives the death penalty or life in prison to Christians for religious choices. Both Republicans and Democrats voted overwhelmingly to continue funding countries who persecute Christians. The committee voted 16-2 to continue aid to countries persecuting Christians.

Our foreign policy must also let us Stand with Israel. That’s why this year, I introduced a bill to cut off all aid to the Palestinian Authority and Hamas until they laid down their arms, stopped firing their rockets, and publicly recognized Israel’s right to exist. The irony is impossible to escape: Our taxpayer dollars may well end up funding Hamas, allowing them to buy more missiles to attack Israel with. My bill was opposed by Republican and Democrat leaders.

Instead, this past week Congress voted to arm Islamic rebels in Syria. One group of these so-called moderate rebels has stated publicly that when they’re done in Syria, next they will head to Israel. I asked on Senate floor last week: “To those of you who wish to arm these Islamic rebels, tell me who among them will recognize Israel’s right to exist?” No one answered because not one of these Islamic rebels will ever think about recognizing Israel.

In country after country, mobs burn the American flag and chant Death to America. Congress responds by sending more of your money to these haters of Christianity. I say not one penny more to any nation that is burning our flag!

It is time to put a stop to this madness, re-examine our foreign policy, halt all aid to Islamic radicals in Syria, Egypt and elsewhere, and take a good hard look at what our foreign policy has done. You and I must and should stand with our fellow Christians in the Middle East and around the world — but that does not necessarily mean war and it certainly does not mean arming both sides in every conflict.

God, help us in these troubling times to make wise decisions, to make moral decisions, and to listen to the voice of God that lives and breathes and resides in us all. Amen.

Paul is the junior U.S. Senator for Kentucky. These remarks are as prepared for delivery to the Value Voters Summit today in Washington, D.C. 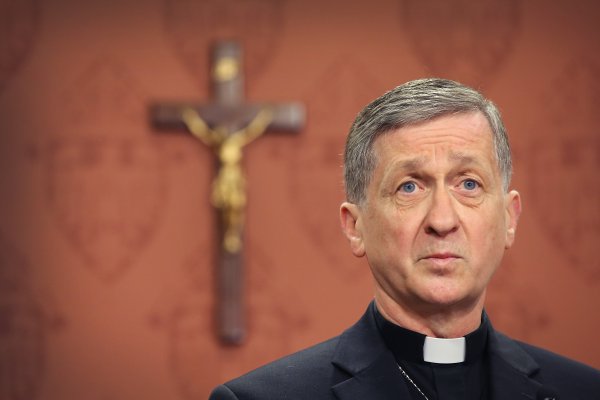 Pope Francis's Winds of Change Cross the Atlantic
Next Up: Editor's Pick