Meet the Fish That Can't Get Jet-Lagged

Birds have ’em. Bees have ’em. Even bacteria have circadian rhythms, the ramping up and slowing down of internal functions that signals organisms to be more or less active, depending on the time of day. Humans have circadian rhythms too—and when they’re disrupted by time-zone changes, lack of sleep or working the night shift, the result can be an increased risk of heart attacks, depression, diabetes, weight gain and more.

For eyeless Mexican cave fish, however, no problem, says a new study in the journal PLOS ONE reports. “Some organisms have stronger circadian rhythms, and some weaker,” says lead author Damian Moran, of the private company Plant and Food Research, based in New Zealand. “But these fish have none at all.”

The finding, says Moran, “just fell into our laps.” He and his colleagues were actually studying the energy costs of vision—that is, how much of the body’s resources evolution thinks it’s worth devoting to having the advantage of being able to see. The Mexican tetra fish is especially useful for such studies because it comes in both a surface-dwelling subspecies and several versions that live in caves, in perpetual darkness (the latter, says Moran, “look a little like Gollum“).

In order to measure the energy cost of having vision, the scientists put both versions of tetra into a kind of fish treadmill, where they could swim constantly upstream while instruments measured their oxygen intake, a gauge of their energy use. To cover all their bases, the scientists tested both types of fish under their most familiar conditions—with a day-night cycle, and in total darkness.

The scientists were looking to measure the differences in energy use between the fish with eyes and those without—but they noticed something else as well. “The surface-dwellers,” says Moran, “had a typical increase of oxygen use during the day, and a decrease during the night. Whereas the cave fish showed a flat line day and night.”

It makes sense: an animal that lives in changing conditions of light and darkness needs to be more active when its food sources are more active, whereas a creature that never sees the light of day probably doesn’t care. Even so, since many organisms that live in utter darkness are descended from surface-dwellers, they maintain at least a weak circadian rhythm. But the cave-dwelling tetra have none, and because they don’t have to ramp their metabolism up and down, they use 27% less energy overall than their daytime-nighttime cousins.

While this is the first such animal ever found, says Moran, the eyeless tetra might actually be just the tip of a gigantic biological iceberg. “Most of the Earth’s biomass lives in areas that never see light at all. I suspect that when we look in the deepest part of the sea or deep underground,” he continues, “we’ll find many organisms that have no circadian rhythms.”

Because after all, what’s the point? 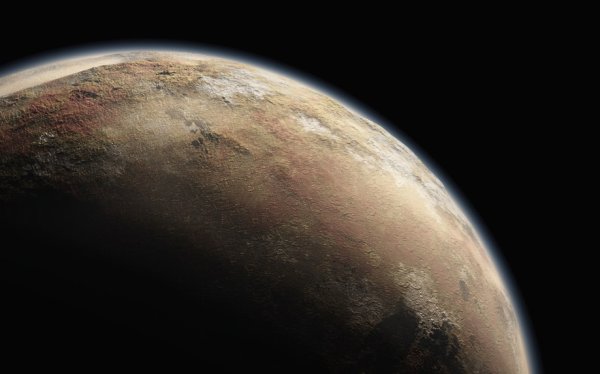 The People Have Voted: Pluto is a Planet!
Next Up: Editor's Pick