In this Sept. 14, 2014, photo, a lion statue is removed from atop the Old State House on Washington Street in Boston
Dina Rudick—AP
By Elizabeth Barber

Boston officials are puzzling over how to retrieve a 113-year-old time capsule from inside a lion statue on Boston’s Old State House.

The time capsule, mentioned in a 1901 Boston Daily Globe article, is a copper box containing contributions from local elected officials of the time, plus buttons from the presidential campaigns of William McKinley and Theodore Roosevelt, Reuters reports.

“The work of the coppersmith is completed, and one of the last things he did was to seal a copper box, which is placed in the head of the lion, and which contains contributions from state and city officials, the Boston daily newspapers, the name of the maker of the lion and unicorn, and others, which will prove interesting when the box is opened many years hence,” reads the Feb. 1901 article.

But the catch is the statue: an iconic, golden lion that has, for 113 years, graced the roof of the 301-year-old Old State House, a red-brick building in Boston’s downtown.

“We are determining the best way to retrieve the time capsule without damaging the lion,” Heather Leet, director of development for the Bostonian Society, which maintains the building, told Reuters.

Boston’s Old State House, where the Declaration of Independence was read to cheering crowds from the building’s east balcony in 1776, was the first seat of the Massachusetts government, and is these days a popular stop for tourists walking the Freedom Trail.

The lion statue and its rooftop neighbor, a silver unicorn — both are symbols of the British monarchy — were taken off the building for maintenance earlier this month, Boston.com says.

Leet told Reuters that the group has known about the hidden box for several years, because a descendant of one of the statue’s sculptors sent them a letter about it. A fiber-optic camera, threaded into a hole in the statue, confirms the box’s existence.

Under the hashtag #LionAndUnicorn, the Bostonian Society has been crowd-sourcing ideas from locals on Twitter, asking them for suggestions on what to add to the capsule. Current ideas include “fossilized cannoli,” Dunkin Donuts styrofoam cups, and “Boston Strong” gear inspired by the city’s pulling together after the bombing of the Boston Marathon in 2013.

There was also the suggestion of a One Direction album. Sound the alarm; the British are coming. Again. 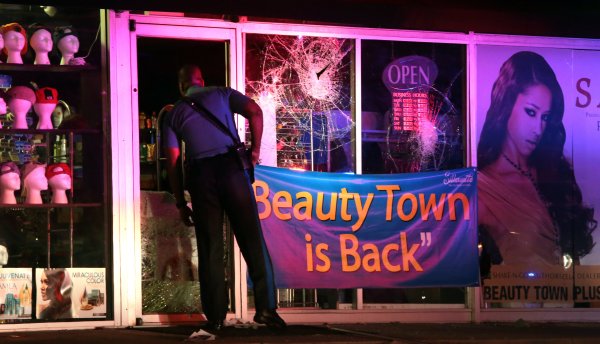 Ferguson Protests Reignite After Fire at Teen's Memorial
Next Up: Editor's Pick