Everything You Need to Know About the Simpsons-Family Guy Crossover

That’s right — this Sunday night will bring another entry in a time-honored (if often lowbrow) tradition of American television: the cartoon crossover. When the 13th season of Family Guy premieres on Fox, it will do so in the form of a one-hour “Smashtacular” crossover with The Simpsons, an episode titled simply, “The Simpsons Guy.”

This episode has everything fans are likely to expect, from self-referential humor to a fight between the two shows’ oafish patriarchs. When Fox Entertainment Chairman Kevin Reilly confirmed the air date a few months back, he boasted that “generations of fans will be talking about this one.”

That’s a little over-ambitious (sort of like Homer trying to spell the word “smart”), especially since, as any self-respecting Simpsons purist knows, the show that redefined animated TV hasn’t actually been good for well over a decade. Still, the wall-to-wall marathon on FXX of every Simpsons episode ever gave even fans who moved on long ago an excuse to rekindle their love of the once-great show.

Family Guy took the same never-aging, family-of-five (not counting Brian Griffin) cartoon-sitcom format and infused it with a raunchiness and unparalleled use of random-cutaway humor. So an unholy mix of both shows means more than enough reason to watch Sunday night.

Before you tune in at 9 p.m. E.T., here’s everything you need to know about the crossover to end all crossovers.

Sure, I’ll bite. What’s the premise?

Based on the trailers Fox has released and the morsels of information the show’s producers have doled out to a hungry fan base, we know that the Griffins of Family Guy fame are forced to leave their Rhode Island town of Quahog and find themselves in the Simpson family’s hometown of Springfield, State Unknown. After the relatively more normal-looking Peter Griffin observes that the yellowish characters of Springfield look “like they have hepatitis,” they strike up a relationship with the Simpson family.

Well, Homer and Peter bond over their love of donuts, Marge Simpson and Lois Griffin connect over their slothful husbands, and Bart Simpson and little Stewie Griffin find common cause in their taste for trouble. “It’s really about the character interaction,” Family Guy creator Seth MacFarlane recently told Entertainment Weekly. “People want to see Peter interact with Homer. They want to see Bart interact with Stewie. In a way, the story in a crossover episode, while it has to be there, is never quite as important as how the characters interact with each other.”

Will there be playful cartoon violence?

Indeed, there will be. The highlight of the official trailer shows Peter offering up Homer his hometown beer, Pawtucket Patriot Ale. Homer tries it, disses it as a rip-off of his favorite beer Duff, and a bit of clever self-reference about both shows — always something each show has done well — and their shared lineage ensues.

Long story short, it comes to blows — scroll to the 2:11-mark of the trailer at top to see it. Hey, at least Peter isn’t fighting a chicken this time.

What else should I know?

Well, there’s already some controversy over a rape joke depicted in the trailer. Stewie, witnessing Bart’s penchant for crank-calling Moe’s Tavern, wants to give it a try himself. But he goes, well, in a slightly different route when Moe picks up the phone: “Hello, Moe? Your sister’s being raped!”

That joke has drawn headlines, especially at a moment of heightened awareness of sexual violence. Tim Winter, president of the Parents Television Council, told CBS News that he wrote to Fox, MacFarlane and Simpsons creator Matt Groening to try to get the joke taken out of the episode but got no response. “I was blown out of my shoes when I saw the scene with the rape joke in it,” Winter said. “It really troubled me.”

In an interview with Entertainment Weekly, MacFarlane both anticipated and dismissed the criticism. “But in context it’s pretty funny,” he said.

Scroll to the 48-second mark in the trailer to see the controversial moment.

Right you are, and in fact, one could find more explicit sexual violence in a strange on-screen promo appeared during a different Family Guy episode. Watch it below.

Not that we know of, unless you’re into a show called Bob’s Burgers.

Wasn’t there a Simpsons crossover before?

Yes, and since it came before the show’s downward slide, it was quite good. It featured Jay Sherman (voiced by Jon Lovitz) of the short-lived Fox show The Critic.

Thanks for all this, but I think I’ll just stick with the first nine seasons of The Simpsons.

You can’t be faulted for bad taste — it is, after all, the height of American TV comedy. Test your knowledge with this quiz and enjoy the video below. 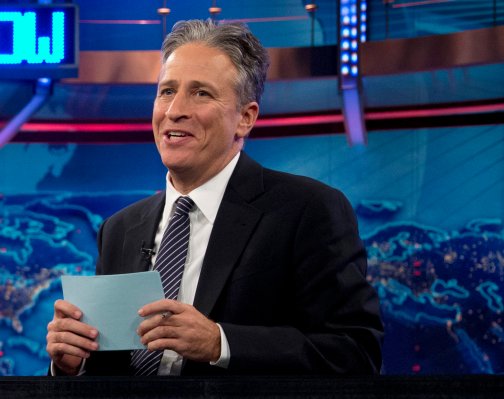 Daily Show Airs Segment That Infuriated Redskins Fans Before It Even Broadcast
Next Up: Editor's Pick