You cannot write scripts like this. In the top of the ninth inning with the Yankees leading the Orioles 5-2, Derek Jeter took the field at Yankee Stadium for what was supposed to be the last time in his illustrious Hall-of-Fame career. But the Baseball Gods had other plans.

After a Nick Markakis walk and Alejandro De Aza strikeout, Adam Jones homered to left field off Yankees closer David Robertson to cut the Orioles’ deficit to one. Robertson then struck out Nelson Cruz to put New York one out away from the victory. But as fate would have it, Steve Pearce took the first pitch he saw, a 91-MPH cutter, and blasted the game-tying home run.

Due up third in the bottom of the ninth, Jeter would bat again.

Orioles manager Buck Showalter replaced pitcher Joe Saunders with Evan Meek, who allowed a single to Jose Pirela to begin the bottom of the ninth. After Antoan Richardson replaced Pirela as a pinch runner, Brett Gardner put down a sacrifice bunt to advance Richardson to second base.

Jeter, who had already doubled in his first at-bat before driving in the go-ahead RBI in the seventh inning, stepped into the batter’s box with one out, a runner in scoring position and a chance to further etch his name into the Yankees’ annals. And he delivered.

Jeter — with his trademark inside-out swing — went after the first pitch, an 86-MPH changeup and slashed it between first and second base. Richardson beat the throw home, the Yankees’ dugout flew onto the field and Jeter, normally humble and mild-mannered, let out a huge smile as he threw his hands into the air. The Yankee Stadium crowd burst into a frenzy and YES Network play-by-play announcer Michael Kay fell silent as Jeter, his teammates, the city of New York and the game of baseball reveled in the moment.

The image of Jeter walking off in his final home at-bat will be a lasting memory, one of far too many to count in his 20-year career. But more importantly, perhaps it’s a microcosm of Jeter doing what he’s always done. Win. 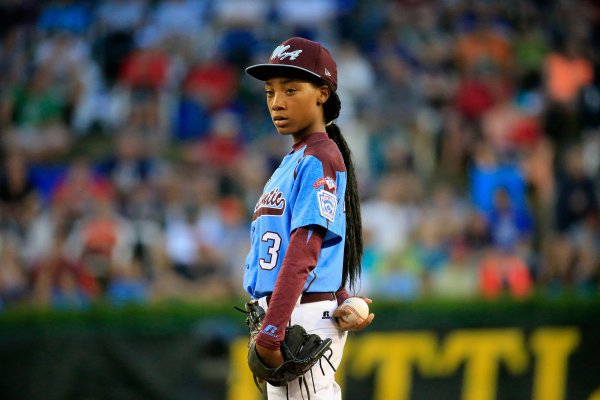 Mo'ne Davis Will Donate Her Jersey to Hall of Fame
Next Up: Editor's Pick