President Barack Obama has not yet decided whom he will choose to succeed Holder, White House officials say, and Holder will stay in office until a successor is confirmed by the Senate. The sources caution that the list of seven names is not exhaustive, and that some on it are being more seriously considered than others. The White House has initiated a formal selection process run by a team that will include White House Counsel Neil Eggleston and will involve interviews and background checks both for security and for political viability.

That latter consideration will be important as the Administration intends to bring the nominee up for Senate consideration during the lame-duck session after the midterm elections in November. Already Republicans, including the ranking minority member of the Senate Judiciary Committee, Sen. Charles Grassley (R-Iowa), have said the confirmation process should be put off until January, when a new, possibly Republican-led Senate convenes.

That is unlikely, though.

“This is a high-priority position; it’s important not just for the President in terms of offering some advice and counsel, it also is important to the country in terms of enforcing our laws,” White House Press Secretary Josh Earnest told reporters Thursday afternoon. “So this is something that will get a fair amount of attention and I’m confident that whoever is nominated to this position will be the kind of candidate that deserves bipartisan support in the Senate.”

But in a sign of how cold relations between the White House and Hill Republicans have become, an aide to Grassley said the senator was not informed of Holder’s imminent resignation before the announcement Thursday, and as of 6 p.m. that evening, he had not been contacted by the Administration. An aide to Senate Judiciary Committee’s Democratic chairman, Patrick Leahy of Vermont, said the senator and Holder had spoken “in the last couple of days.”

It is unclear whether the White House intends to consult Republicans as part of the process of selecting a nominee. Holder’s predecessor, Attorney General Michael Mukasey, was picked by then-President George W. Bush after lengthy discussions with Senate Democrats, though the circumstances were quite different. In the wake of the scandal surrounding the politically-motivated firing of federal prosecutors by then-Attorney General Alberto Gonzales, the Bush White House had secret conversations with powerful Democrats, who controlled the Senate. One Democratic aide then on the Judiciary Committee said Bush’s White House counsel Fred Fielding consulted Sen. Charles Schumer (D-N.Y.) over possible successors and that Sen. Harry Reid (R-Nev.) rejected one candidate, former Solicitor General Ted Olson. Both sides eventually settled on Mukasey.

The candidates this time represent a fairly broad cross section of legal backgrounds. Two have limited experience on national security matters. At least one has a rocky record of confirmation in the Senate.

Perez faced a tough battle in the Senate to become Labor Secretary, getting confirmed 54-46 on a party-line vote after overcoming a GOP filibuster. Mayorkas was confirmed as Homeland deputy last December after heading the U.S. Citizenship and Immigration Services; he was previously a U.S. attorney in California during the Clinton administration. Napolitano served as Obama’s Homeland Security secretary from 2009-13. Durkan has said she intends to step down as the top prosecutor in Seattle this month; she prosecuted financial and national security cases. Bharara has successfully pursued scores of insider trading cases on Wall Street and several high profile national security cases. Verrilli is the Administration’s top lawyer at the Supreme Court and argued high-profile cases including the successful defense of Obamacare. West stepped down Sept. 15 as the No. 3 Justice Department official after successfully winning more than $30 billion in settlements from Wall Street banks in the wake of the financial crisis. 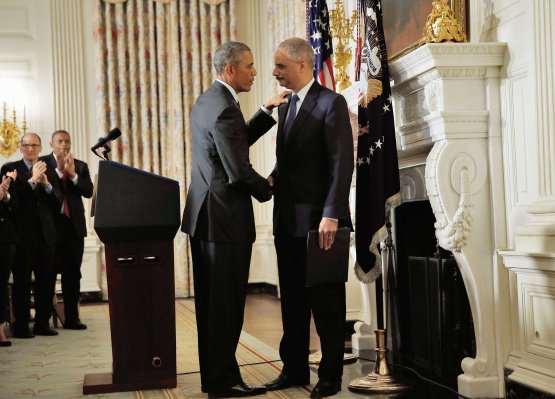 Obama Pays Tribute to Holder
Next Up: Editor's Pick