On TV, on Twitter and in public statements, Democrats were as quick to praise the nation’s outgoing top cop as Republicans were to vilify him.

“I hate to see Eric Holder leave,” Sen. Patrick Leahy (D-Vt.), the Judiciary Committee chairman, told NBC. “I remember the day he was sworn in and the huge cheers that echoed throughout the Department of Justice—throughout the building—because they were finally getting somebody who actually knew how the Justice Department worked, who cared about law enforcement, cared about the rule of law.”

“I’ve been here through a lot of attorneys general and nobody has done it better than he has,” added Leahy, who was elected to the Senate in 1974.

Sen. Bill Nelson (D-Fla.) said Holder has “led the fight to protect the right to vote for all citizens.”

And Rep. John Lewis (D-Ga.), a civil rights hero who gave a glowing tribute to Holder for the TIME 100 this year, was taken aback when House Minority Leader Nancy Pelosi announced the news at a Congressional Black Caucus Foundation event.

“His resignation is a great loss for any American seeking justice in our society,” Lewis said in a statement later. “He became the symbol of fairness, an embodiment of the best in the federal government. He has been a persistent and consistent leader in the struggle for civil and human rights. That legacy is in his bones. It is written on his heart, and his intelligence and committed leadership will be hard to replace.”

Rep. Darrell Isssa (R-Calif.), chairman of the House Oversight Committee and perhaps Capitol Hill’s most vocal Holder antagonist, cheered the news, tweeting that Holder has the “dubious distinction” of being the first Attorney General held in contempt of Congress. Issa led the drive for that 2012 House vote after Holder declined to hand over documents related to the so-called Fast and Furious scandal, in which federal law enforcement agents allowed the sale of weapons so they could track the flow of them to Mexican drug cartels. One of the weapons was found at the scene of the shooting death of an American border patrol agent in 2010.

“Eric Holder is the most divisive U.S. Attorney General in modern history,” Issa tweeted. “By needlessly injecting politics into law enforcement, Holder’s legacy has eroded more confidence in our legal system than any AG before him.”

Rep. Kevin Brady (R-Texas) said in a statement that Holder had “repeatedly refused” to enforce U.S. law and that his resignation is “great news” and long overdue. Brady said his record includes the following: “Ignoring the clearly unlawful behavior of IRS employee Lois Lerner, illegal gun-running to Mexican drug cartels and being held in contempt by the U.S. House of Representatives.”

Sen. David Vitter (R-La.) said in a statement no other Attorneys General had “attacked Louisiana more than Holder.”

“He’s tried to defund a Louisiana youth program because students prayed, sued to block voucher scholarships going to poor kids in failing schools, and threatened the release of Louisiana voters’ personal information,” Vitter said. “I’m proud to have voted against this Senate confirmation.” 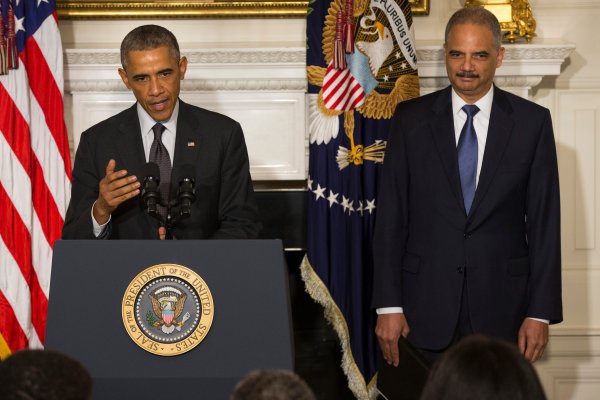 Eric Holder Will Leave a Legacy of Civil Rights Activism
Next Up: Editor's Pick