Iranian President Hassan Rouhani criticized U.S.-led airstrikes against militants in Iraq and Syria during a speech at the United Nations on Thursday, calling for regional countries to lead the operation instead.

However, Rouhani said Iran can reach a deal over its nuclear program before the November deadline if Western negotiators are willing. He added that such a deal could open the door to “cooperation at regional and international levels, allowing for greater focus on some very important regional issues such as combating violence and extremism in the region.”

Rouhani has sought to warm chilled relations with the West since he took office more than a year ago, but he has recently questioned U.S. President Barack Obama’s effort to foster international support for U.S.-led airstrikes against the Sunni militants known as the Islamic State of Iraq and Greater Syria, or ISIS.

“Since the pain is better known by the countries in the region, better they can form a coalition,” Rouhani told the UN General Assembly.

The Iranian president, widely seen by the West as a moderate, has also come under fire for the July detainment of Washington Post reporter Jason Rezaian, a dual citizen who was jailed with his wife.

In part due to the recent tensions, it’s unlikely that Obama and Rouhani will repeat the act of detent that occurred last year when the two leaders spoke over the phone while the Iranian president was in New York City. Still, Rouhani did meet with British Prime Minister David Cameron on Wednesday — marking the first time that Britain’s and Iran’s leaders met in 35 years — for what Rouhani said in a tweet was a “constructive and pragmatic dialogue.” 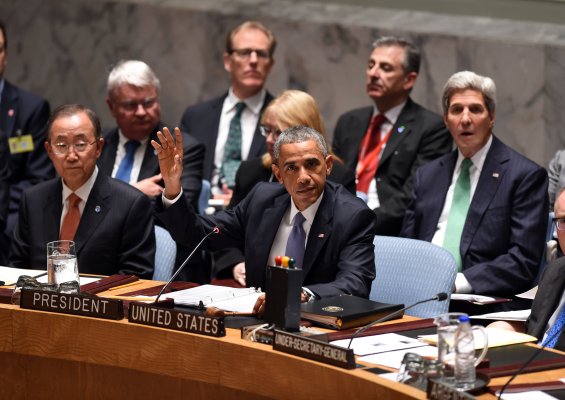 U.S. to Terrorists: Freeze!
Next Up: Editor's Pick