A lotus-flower seller stands underneath the Australian flag along the riverside in Phnom Penh on Aug. 13, 2014. After months of negotiations Australia and Cambodia look set to agree on a deal that will see 1,000 refugees transferred from Australia to Cambodia
Omar Havana—Getty Images
By Charlie Campbell

Australia is to ink a deal on Friday to resettle refugees in Cambodia, despite the Southeast Asian nation’s poverty and appalling rights record.

The forthcoming pact comes just months after Canberra scolded Cambodia at the U.N. for a litany of human-rights abuses including the killing of peaceful protesters, the crushing of political opposition and use of extrajudicial detentions.

The controversial arrangement — thought to be for the initial permanent resettlement of 1,000 people, although there is apparently no upper cap — will be signed in Phnom Penh between Australian Immigration Minister Scott Morrison and Cambodian Interior Minister Sar Kheng.

“We are world renowned for what we do on refugee resettlement so, who better is placed than Australia to work with a country such as Cambodia to help them develop that capability to do the job as well,” Morrison told Australia’s National Press Club earlier this month.

There are unconfirmed reports that Australia will pay the Cambodian government $40 million to seal the deal; requests to Canberra from TIME for clarification went unanswered.

The UNHCR has raised “strong concerns” as the plan “goes against the whole idea of the international asylum system,” says Bangkok-based spokeswoman Vivian Tan. “We have asked both sides to reconsider, but it looks like it is going ahead.”

Australia’s new Conservative Prime Minister Tony Abbott was elected partly on the back of promises to stem the flood of asylum seekers arriving by boat on his nation’s shores.

Fetid and overcrowded immigration detention centers in Papua New Guinea, and the nearby island nation of Nauru, established by the preceding Labour government, are used to house new arrivals.

Of the 1,233 asylum seekers currently detained in Nauru, 250 status determinations have been carried out, leading to 206 declarations of genuine refugee status, according to Human Rights Watch.

“In Nauru, they were identified as refugees and not just irregular migrants trying to find work,” says Tan. “These are people with a demonstrated need for international protection.”

Authoritarian Cambodia is listed as “not free” by advocacy group Freedom House, and, after decades of poverty owing to civil war, genocide and Vietnamese occupation, is better known for generating refugees than accepting them.

Even today, a sizable proportion of Cambodia’s 15 million population is driven to neighboring countries like Thailand in search of work.

According to Ou Virak, president of the Cambodia Center for Human Rights, “Everybody knows we are not well equipped to accept refugees,” pointing to the fact that “no refugees themselves are coming to Cambodia.”

There is an unavoidable catch-22, he adds, as not providing refugees with basic support would be a “gross violation” of their rights, but fulfilling their needs will enrage impoverished Khmers, many of whom struggle to survive. Already, violent attacks against Cambodia’s Vietnamese community, measuring around 5% of the total population, are relatively common.

“They will be in a state of limbo for many years, if they can integrate at all,” says Ou Virak, adding that there are huge questions over how long Canberra will keep providing financial assistance. “Giving food to refugees and sustaining their calorie needs is not enough.” 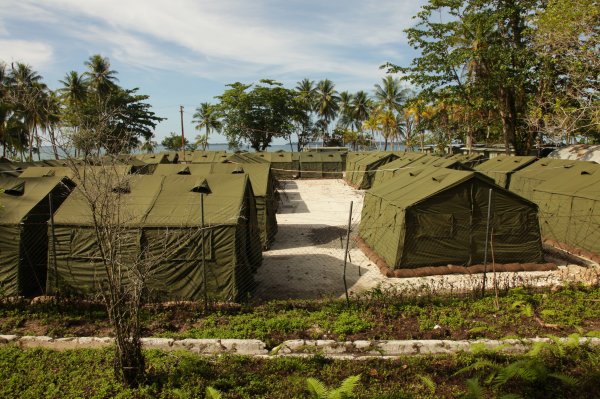 Gay Asylum Seekers May Be Resettled in Anti-Gay Country
Next Up: Editor's Pick