Vietnam’s Deputy Prime Minister and Foreign Minister Pham Binh Minh has said that Hanoi would welcome the U.S. dropping a decades-old arms embargo against his country.

Minh’s pronouncement came a day after Reuters published a story citing an unidentified American official and two senior executives in the U.S. weapons industry who stated that Washington was on the verge of lifting the 30-year-old ban targeting its erstwhile enemy.

The assessment follows similar comments made earlier in the summer by Ted Osius, who is currently awaiting confirmation of his appointment as the next U.S. ambassador to Vietnam. During a hearing with a Senate panel in June, the veteran diplomat said it might be “time to begin exploring the possibility of lifting the ban.”

“I think dropping of the embargo would represent a significant change in the relationship in a variety of important respects,” says Jonathan London, a professor and Vietnamese scholar at Hong Kong’s City University, and the author of Politics in Contemporary Vietnam: Party, State, and Authority Relations.

“Not only would Vietnam be able to acquire arms and equipment, which it sorely needs particularly with respect to maritime capabilities, but it would also imply opportunities to deepen military-to-military ties between the countries and I think arguably that’s at least as significant as the ability to acquire arms.”

The warming of ties between Hanoi and Washington follows an exceptionally rocky period in relations between Vietnam and Beijing.

In May, Vietnam’s smoldering distrust of its northern neighbor erupted after a billion-dollar drilling platform belonging to a Chinese state-owned company dropped anchor in the middle of fiercely contested waters near the disputed Paracel archipelago in the South China Sea.

The presence of the drilling unit set off riots across Vietnam and led to months of maritime clashes as Vietnamese cutters tangled with Chinese coast guard vessels, until the rig was withdrawn from the contentious site in July.

Despite increased tensions with Beijing, experts say Vietnam’s leadership remains pragmatic and unlikely to abruptly give up its relationship with China for the sake of closer ties with Washington.

“Vietnam is a long way from joining any alliance with the U.S. — it doesn’t even participate in the CARAT [Cooperation Afloat Readiness and Training] naval cooperation exercises with the U.S. that almost every other ASEAN country does,” Bill Hayton, author of The South China Sea: The Struggle for the Power in Asia, tells TIME.

“However, it is hedging its bets and warning China to moderate its actions in the South China Sea, particularly.”

During the question-and-answer session at the Asia Society, Foreign Minister Minh brushed off the suggestion by the society’s moderator that the potential sale of U.S. hardware to Vietnam would irritate Beijing. 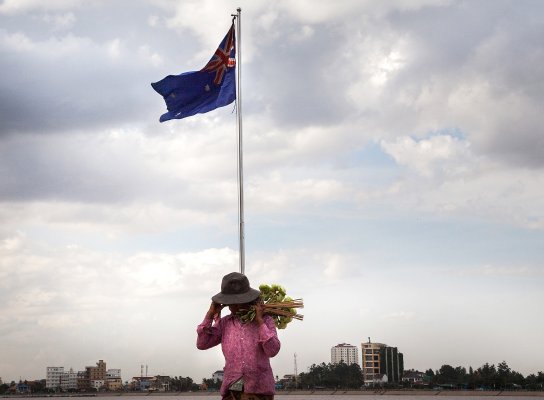