U.S. citizen Matthew Miller during his trial at the North Korean Supreme Court in Pyongyang in this undated photo released by the state-run Korean Central News Agency on Sept. 14, 2014
KCNA/Reuters
By Elizabeth Barber

An American man has begun a six-year sentence of hard labor in North Korea, CNN reports.

Matthew Miller, of Bakersfield, Calif., was arrested in North Korea in April and convicted earlier this month of committing acts “hostile” to the regime.

A shaven-headed Miller has been assigned the prisoner number 107, but CNN says there are no details of where in North Korea he will serve his sentence, or the nature of the labor he will be required to perform.

The state-run Korean Central News Agency claimed that the 25-year-old tore up his tourist visa upon arrival in Pyongyang as part of a ploy to be sent to prison so that he could report on human-rights violations there. It accused him of wanting to become a “second Snowden through intentional hooliganism.”

Washington, which has no diplomatic ties with Pyongyang, has unsuccessfully sought a meeting with North Korean officials to arrange the release of three Americans held in the state, including Miller. 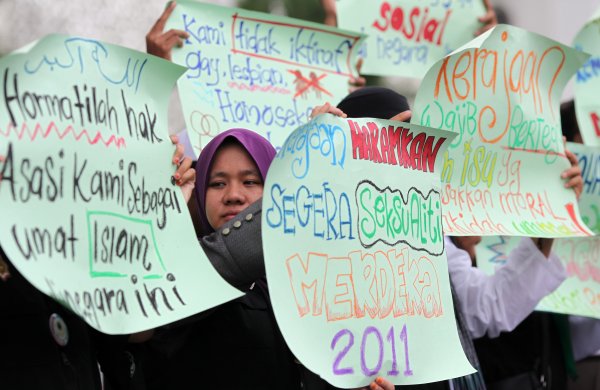 Shari‘a Law Threatens LGBTs in Asia
Next Up: Editor's Pick