Lexie, a Labrador mix, was barking in fear when the police arrived at her owner’s suburban Detroit house early in the morning last November. The officers, responding to a call about a dog roaming the area, arrived with dog-catching gear. Yet they didn’t help the one-year-old dog, who had been left outside the house, according to a lawsuit filed in federal court: Instead, they pulled out their guns and shot Lexie eight times.

“The only thing I’m gonna do is shoot it anyway,” the lawsuit quotes an officer saying. “I do not like dogs.”

Such a response, animal advocates say, is not uncommon among law enforcement officers in America who are often ill-equipped to deal with animals in the line of duty. And now bereaved owners like Brittany Preston, Lexie’s owner, are suing cities and police departments, expressing outrage at what they see as an abuse of power by police. Animal activists, meanwhile, are turning to state legislatures to combat the problem, with demands for better police training in dealing with pets.

There are no official tallies of dog killings by police, but media reports suggest there are, at minimum, dozens every year, and possibly many more. When it comes to Preston’s dog, officials from the city of St. Clair Shores and the dog owner agree on little. City police say the dog attacked, prompting officers to open fire in self-defense. But the lawsuit filed by Preston cites police audio recordings to argue that the November 2013 shooting was premeditated, prompted by officers eager to kill a dog. Preston is suing the city for violating her Fourth Amendment right to protection from unreasonable search and seizure.

“We want whatever it takes to make sure it doesn’t happen again,” said Christopher Olson, Preston’s lawyer. “Before this case I wasn’t a dog shooting lawyer, but I am now.”

“The animal was only put down after a decision was made that it was in the best interest of the residents,” said city attorney Robert Ihrie, who is defending the city in the lawsuit. “Sometimes police officers are in a position where they need to make very quick decisions for the protection of themselves and others.”

The Fourth Amendment argument gained traction in 2005, when the San Jose chapter of the Hells Angels sued the city and the police department because officers had killed dogs during a gang raid in 1998. A federal appeals judge found that “the Fourth Amendment forbids the killing of a person’s dog… when that destruction is unnecessary,” and the Hells Angels ultimately won $1.8 million in damages. In addition to the St. Clair lawsuit, other lawsuits stemming from police shootings of dogs are being planned or filed in Idaho, California, and Nevada.

At the same time, animal-rights activists are lobbying police departments to implement pet training for all officers. Several states including Illinois and Colorado have enacted measures to reduce dog shootings, and others states are considering legislation. In 2011, the Department of Justice published a report on dog-related police incidents, which included advice on how to handle dogs without killing them.

“It’s much more likely that a cop is going to encounter a dog than a terrorist, yet there’s no training,” said Ledy Van Kavage, an attorney for the advocacy group Best Friends Animal Society. “If you have a fear or hatred of dogs, then you shouldn’t be a police officer, just like if you have a hatred of different social groups.”

Brian Kilcommons, a professional dog-trainer who has trained more than 40,000 dogs and published books on the subject, said some police officers accidentally antagonize dogs right from the start, without even trying. “Police officers go into a situation with full testosterone body language, trying to control the situation,” he said. “That’s exactly what will set a dog off.” Kilcommons is developing an app that could help police officers evaluate the best way to handle a dog, including tips on reading body language and non-lethal strategies for containing them. “A bag of treats goes a long way,” he said.

But Jim Crosby, a retired Lieutenant with the Jacksonville Sheriff’s Office in Florida who now works in dog training, said there are sometimes cases that require police force.

“If you’re executing a high-risk, hard-going entry with an armed suspect, the officers don’t have time to play nice and throw cookies at the dog,” said Crosby, who was commenting on police handling of dogs in general and not any specific case. But he emphasized that such situations are few and far between: “Police absolutely have the right to protect themselves against a reasonable and viable threat—but the presence of a dog is not necessarily a reasonable or viable threat.”

Ronald Janota, a retired Lieutenant Colonel with the Illinois State Police who now serves as an expert witness on use of force, acknowledged that officers are often at “heightened awareness” when confronting dogs. “If you’re the first or second through the door, you don’t have time to put a collar on the dog if the dog is literally lunging at you,” he said. “If you’re entering the house legally, you have the right to protect yourself.”

Regardless of the circumstances, a dog’s death at the hands of police can be devastating to owners.

“People are getting married later, if at all, people are having children later, if at all, and pets are filling an emotional niche,” Kilcommons said. “Before, if you had a dog and it got killed, you got another one. Now dogs are in our homes and in our hearts. They’re not replaceable. So when they’re injured or killed, people are retaliating.”

In St. Clair Shores, where Lexie died, the city is fighting the lawsuit but the police department now requires its officers to undergo animal control training.

Van Kavage said that kind of training is crucial, even if just to instill a sense of trust in the police.

Correction: The original version of this story misidentified the person who said, “To control a dog, 99% of the time you don’t need a gun. You just need to yell ‘sit!’ ‘stay!’” It was Ledy Van Kavage.

Write to Charlotte Alter at charlotte.alter@time.com and Justin Worland at justin.worland@time.com. 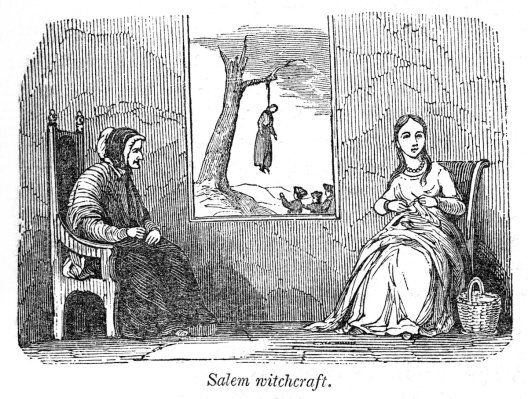 The Last of the Witch-Trial Hangings
Next Up: Editor's Pick