The 5 Biggest Mistakes in the Ebola Outbreak

The U.S. Centers for Disease Control and Prevention (CDC) recently projected that if trends continue unimpeded, cases of Ebola could pass the million mark by January. While that’s an unlikely scenario, many are still wondering: How on earth did it get this bad? We canvassed experts for some clues.

1. The response was far too slow
There was a period in April when it appeared that the Ebola outbreak had subsided, prompting a collective sigh of relief. Guinea’s Ministry of Health even said that country’s caseload appeared to be under control. But the outbreak didn’t subside. Instead, it barreled through interconnected towns and villages in more-populated areas of Guinea, Liberia and Sierra Leone. And after the outbreak’s perceived lull, however, came one of the largest flare-ups. Some scientists say that during that time, their warnings were ignored.

One such scientist is Robert Garry, a Tulane University virologist who had visited a hospital in Sierra Leone caring for some of his colleagues, including Dr. Sheik Humarr Khan — one of the first doctors to die of the disease in Sierra Leone. Garry then warned various groups, including the State Department, that the outbreak was highly concerning. No one, he says, really listened to him. “Their response was cordial, but nothing really happened,” says Garry. “I was really concerned about the lack of attention. I caught a lot of flack for saying I didn’t think the numbers [of reported cases and deaths caused by Ebola] were accurate. Some of us realized this was not going to be controlled.”

In a recent paper published in the New England Journal of Medicine, Peter Piot, director of the London School of Hygiene and Tropical Medicine and one of the original researchers to discover Ebola in 1976, writes: “Ebola has reached the point where it could establish itself as an endemic infection because of a highly inadequate and late global response … It was not until five months and 1,000 deaths later that a public health emergency was declared, and it was nearly another two months before a humanitarian response began to be put in place.”

2. A lack of cultural sensitivity
Patricia Omidian, a medical anthropologist, was sought by the World Health Organization (WHO) to spend time in Liberia to help Ebola response workers better understand the communities they were serving. “I think the biggest mistake that occurred very early was that primary health care was ignored and communities were not included in their own health issues,” she says. “Programs were rolled out and people were told what not to do. No effort was made to ensure engagement and increase trust.”

Omidian’s work included explaining some of the cultural practices among Liberians, including burial rituals that involve a lot of physical contact, putting mourners at risk of contracting the virus. “This disease attacks the best of [Liberians’] culture — that of touching and caring and kindness,” says Omidian.

3. We don’t have deployable medical teams
The CDC, WHO and U.N. have important jobs when it comes to containment practices like tracking down people who may have come in contact with infected patients, and using technology to predict disease spread. However, none of those groups actually treat patients, or have doctors and nurses they can deploy. This is something that Dr. Jack Chow, professor of global health at Carnegie Mellon University and a former WHO assistant director general, says needs to change.

“The Obama mission to Liberia, which is relying on the military at the last minute, shows that the U.S. and other industrial countries haven’t built up comparable deployable medical units on the civilian side, and need to do so to prepare against future ‘flashdemics’ — high-velocity, high-lethality outbreaks,” says Chow. “In addition to building an international epidemic response force, we need to conceptualize ‘global health defense’ to include bolstering the health systems of the poorest countries.”

4. A lack of approved drugs and cures
The scarcity of drugs and vaccines is not due to a lack of innovation. Drugs have been in development for years, but since pharmaceutical companies have had no financial incentive to fund them, researchers have hit walls. “People like me and others who have worked for years in vaccines and countermeasures are frustrated,” Thomas Geisbert, a professor of microbiology and immunology at the University of Texas Medical Branch in Galveston, said in an earlier TIME article. The supply of ZMapp, the drug that was given to a few health care workers, is exhausted. It comes from a small pharmaceutical company with nine employees, and the drug grows in a tobacco plant — requiring scientists to wait for a new crop to grow just for a new batch. Thankfully, clinical trials for other drugs have kicked off.

5. Treating Ebola as a “West Africa” problem
“It’s crucial countries not be lumped together,” says Nigerian Minister of Economy and Minister of Finance Ngozi Okonjo-Iweala. “The media writes about Africa and West Africa, but there needs to be differentiation. This will end up hurting the economies of countries that have no problems. Ghana never had any cases, Burkina Faso never had any cases.” Okonjo-Iweala was also the former managing director of the World Bank, and has seen how stigma damages economies.

“We should stick to the specific countries so as not to cause massive economic damage,” says Okonjo-Iweala. “We have worked very hard to get the private sector to invest in Africa for the continent to grow based on the fact that we are a continent with a lot of vigor and good rates of return on investment. If you scare away investors by lumping the continent into one big mass, what good does it do? It will take another decade to recover.”

Nigeria has had 19 cases, seven deaths and everyone else survived. As of Tuesday, the 21 days of incubation expired for people who treated the infected, so currently no one is being monitored. “We’ve worked hard as a continent to overcome this kind of stigma of disease,” says Okonjo-Iweala. 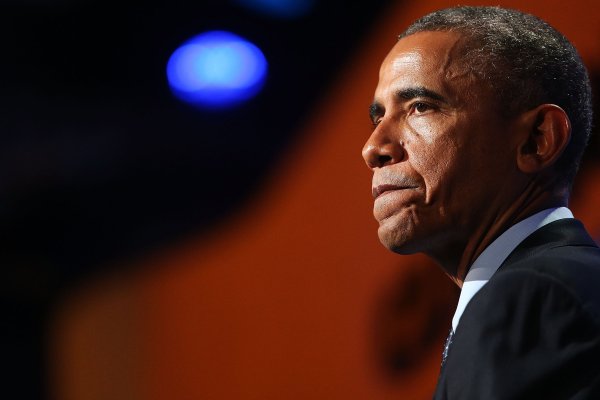 LIVE: Obama Speaks About the Ebola Crisis
Next Up: Editor's Pick