With the U.S. military continuing its air campaign against the Islamic State of Iraq and Greater Syria (ISIS), President Barack Obama sounded a call to the world to combat of the spread of Islamic extremism Wednesday.

Acknowledging a “pervasive unease in our world” in an address to the United Nations General Assembly, Obama highlighted American efforts to address global challenges from Ebola to Russia’s invasion of Ukraine, but devoted much of his annual speech to rebutting extremist ideologies, and encouraging the world to join the U.S.-led campaign against them.

“It is time for the world–especially Muslim communities–to explicitly, forcefully, and consistently reject the ideology of al Qaeda and [ISIS],” Obama said, calling on leaders to reject sectarian strife and push back on extremist propaganda. “It is time for a new compact among the civilized peoples of this world to eradicate war at its most fundamental source: the corruption of young minds by violent ideology.”

“No God condones this terror,” Obama said of the Islamist militant group which has seized large swaths of territory across Iraq and Syria. “No grievance justifies these actions. There can be no reasoning—no negotiation—with this brand of evil. The only language understood by killers like this is the language of force. So the United States of America will work with a broad coalition to dismantle this network of death.”

Speaking 36 hours after the U.S. launched an extended air campaign against ISIS in Syria alongside Arab allies, Obama reiterated the U.S. commitment to strike out against terrorist threats wherever they reside. “Ultimately, the task of rejecting sectarianism and extremism is a generational task—a task for the people of the Middle East themselves,” Obama said. “No external power can bring about a transformation of hearts and minds. But America will be a respectful and constructive partner. We will neither tolerate terrorist safe-havens, nor act as an occupying power.”

Elsewhere in his speech, Obama was sharply critical of Russian aggression in eastern Ukraine, warning that Russia’s actions “challenge” the post-World War II order. “This is a vision of the world in which might makes right—a world in which one nation’s borders can be redrawn by another, and civilized people are not allowed to recover the remains of their loved ones because of the truth that might be revealed,” Obama said. “We will impose a cost on Russia for aggression, and counter falsehoods with the truth.”

Highlighting the role America is playing in addressing the Ebola crisis in West Africa, including deploying hundreds of doctors and thousands of troops to assist in the response, Obama said “It’s easy to see this as a distant problem – until it is not… At this crossroads, I can promise you that the United States of America will not be distracted or deterred from what must be done.”

Obama also invoked last month’s unrest in Ferguson, Mo. following the shooting of Michael Brown, conceding that the U.S. has struggled to live up to its ideals, but said that despite challenges “we welcome the scrutiny of the world” as a country that is striving to address its lingering problems.

“So yes, we have our own racial and ethnic tensions,” Obama said. “And like every country, we continually wrestle with how to reconcile the vast changes wrought by globalization and greater diversity with the traditions that we hold dear. But we welcome the scrutiny of the world – because what you see in America is a country that has steadily worked to address our problems and make our union more perfect. America is not the same as it was 100 years ago, 50 years ago, or even a decade ago. Because we fight for our ideals, and are willing to criticize ourselves when we fall short.” 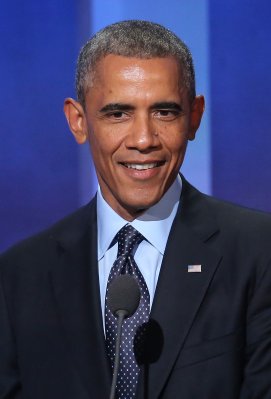 Watch the Obama Salute That Caused a Firestorm
Next Up: Editor's Pick