This Sept. 24, like the previous 10, is National Punctuation Day. ’Tis a time for merrily gargling our hyphens and luxuriating in bathtubs full of em dashes, for braiding parentheses in our hair and giving our suitors octothorpes as love tokens after we dance on clouds of ampersands.

Here are five modern examples of how punctuation is evolving, with no certain conclusion and whether the traditionalists like it or not.

Emoji are being wielded as punctuation.

Especially on platforms like Twitter, emoji are being used to serve the same key purpose of punctuation: aiding understanding by providing clues to how the surrounding words should be interpreted. Take the text of this real tweet, randomly selected from emojitracker.com:

“Who tf put cheese in my bag today

Just as exclamation points can convey excitement or question marks can suggest a lack of certainty, the angry face helps the reader understand that writer was angry about discovering their bag contained cheese of uncertain origin.

There is more freedom from conventions.

Look back at the above tweet. While an English teacher might whip out her red pen and put a question mark at the end of the sentence, we can easily discern the writer’s uncertainty about the cheese-smuggler’s identity by the word who. We don’t need the mark, and space-constrained platforms like Twitter and text messages have made us more apt to drop unnecessary characters—as well as less likely to make the assumption that character-dropping equals ignorance.

Meanwhile, the same marks missing from the ends of sentences or middle of words are settling into non-traditional roles. “Now you have Twitter and email taking older marks and giving them new life as emoticons,” says Keith Houston, blogger and author of Shady Characters, a history of punctuation marks. “People are punctuating in unstandard ways, and they are freed from convention because these messages are ephemeral.”

The apostrophe is losing steam in some circles.

Social media analytics firm Brandwatch scoured Twitter for trends in 2013 and found that the top five “grammatical errors” were: im, wont, cant, dont and id. Meanwhile, corporations like British super-bookstore Waterstones (neé Waterstone’s) have seen fit to erase those marks from their names. Cities are dropping them from street signs. And while some grammarians may cry most foul, others are calling for the apostrophe’s dumb round head.

The advocates behind the “Kill the Apostrophe” website have been joined by author James Harbeck in asserting that, in most cases, rules about apostrophe usage only serve to irritate those people who know the rules and confuse those who do not. “The great question with a lot of punctuation is, Do you really need it?” says Ammon Shea, author of hilarious grammar-police-takedown Bad English. And, he says, there’s often little risk of confusion when theyre absent.

Exclamation marks are becoming harder to avoid, for those who would like to avoid them.

As many have noted, the period that used to innocuously signal the end of a thought—like an orchestra conductor pinching his hand—has taken on a brusque aura these days, leaving the reader of any declarative sentence open to detect apathy or annoyance. This has led to a rise in exclamation marks, because people need something to fill the gaps left by informative cues we get only in face-to-face communication—the raised brows, the wide eyes, the smile. Fearing that we could come across as unfriendly, we tack on an exclamation mark (“Thanks!”) to make sure our fine disposition comes across.

The data supporting this shift is largely anecdotal, but the anecdotes are abundant. “The exclamation mark, once reserved for expressing joy or excitement, now simply marks baseline politeness,” writes New York Magazine’s Melissa Dahl, who goes on to quote a grammarian who describes them as nearly “mandatory” in email. “Dealing with such bare bones language,” says Shea, “you use whatever help you can get.” (If you don’t want this kind of help, there is a handy TIME guide on alternatives.)

Hyphens are being retired, perhaps faster than ever.

Hyphens have, of course, been chucked for centuries, as in the previous example of to-day becoming today. But that shift, Houston says, took about a century and wasn’t finalized until the 1900s. Today, at least some of the hyphen-tossing is happening faster. Take electronic mail, which started as the crazy notion of “E-mail” in the 1970s and became the un-hyphenated, ho-hum “email” among prevailing American media outlets in about 40 years.“The migration to ebook, ecommerce and email is not unexpected,” Merriam-Webster President John Morse previously told TIME. “This transition may come more readily in today’s technological environment.”

We can only wonder what tricksy technology is going to do to punctuation between now and next year’s National Punctuation Day. In the meantime, I need to get back to my em-dash bath. 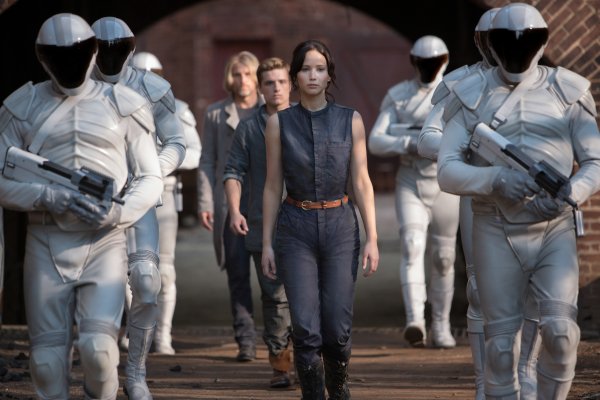 Hollywood's Gender Gap Is as Gaping as Ever
Next Up: Editor's Pick