Tourists stand near the barricade that keeping visitors away from the fence outside The White House after the homeless 42-year-old man Omar Gonzales jumped the White House fence on Friday, in Washington D.C., United States on 22 September 2014.
Anadolu Agency—Getty Images
By Jack Linshi

The Secret Service erected a temporary extra barrier a few feet in front of the White House’s existing iron fence Tuesday as investigations continue into how a trespasser scaled the fence and entered the executive mansion last week.

The additional fence, about three feet high, will serve as a buffer zone between the general public and the presidential residence, according to Bloomberg.

“This temporary closure is in effect while the Secret Service conducts a comprehensive review of the fence jumping incident which occurred on Friday September 19th,” Secret Service Agent Ed Donovan said in a statement. However, Donovan did not say when the extra barrier would be removed.

White House Press Secretary Josh Earnest said Monday that officials intend to enforce White House security without banning the general public from observing the iconic residence at its perimeter. “The Secret Service has the challenging task of balancing the need to ensure the safety and security of the first family, while also ensuring that the White House continues to be the people’s house,” Earnest said.

The trespasser, identified by the Secret Service as 42-year-old Texas resident Omar J. Gonzalez, jumped an iron fence Friday evening and was able to enter a White House door before being apprehended. He was found to have been carrying a knife on his body and had 800 rounds of ammunition in his car, a prosecutor said Monday. 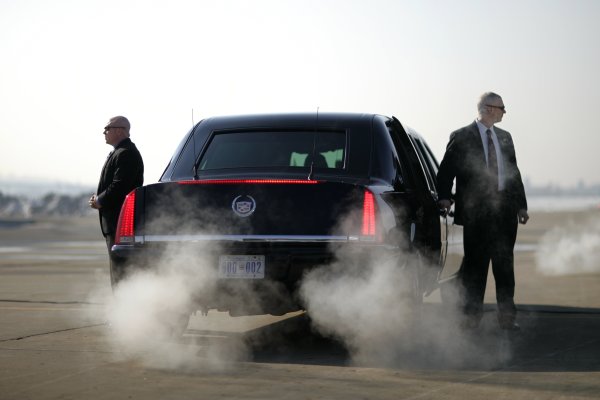 Behind the Scenes with the Secret Service
Next Up: Editor's Pick