These Are the Weapons the U.S. Is Using to Attack ISIS

Things generally seem to go best on the first day of any given military campaign. That certainly seemed to be the case Tuesday, as the U.S. and its allies struck 22 locations across northern Syria in their expanded air war against the Islamic State of Iraq and Greater Syria (ISIS), and the Khorasan Group, an al-Qaeda offshoot.

Some of the world’s most sophisticated military hardware streaked through darkened skies over Syria, the Persian Gulf and the Red Sea during the five hours the strikes took place. While it was no day at the beach for the two terrorist groups holed up in Syria, they did see three separate waves of kinetic killers headed their way.

The initial volleys of 47 Tomahawk cruise missiles came from the guided-missile destroyer USS Arleigh Burke, in the Red Sea, and the guided-missile cruiser USS Philippine Sea, in the northern Persian Gulf. The missiles, with a range of up to 1,000 miles (1,700 km), have been the curtain-raiser on U.S. military strikes since 1991’s Gulf War. That makes sense: there’s no pilot to be shot down.

Among other targets, Tomahawks struck an ISIS financial center. “The intended target was the communications array on the roof of the building,” said Army Lieut. General Bill Mayville, the operations director for the Joint Chiefs of Staff.. “The Tomahawk cruise missiles detonated as airbursts with the effects focusing on the communications array. And as you can see on the right-hand side in the picture–the after picture—the rooftop communications is heavily damaged while the surrounding structure remains largely intact.”

“The majority of the Tomahawk strikes were against Khorasan group compounds, their manufacturing workshops and training camps,” Mayville told reporters.

That’s interesting: It means most of the missiles attacked no more than the eight announced Khorasan targets. The Khorosan Group is an al-Qaeda affiliate dispatched to Syria to try to develop sophisticated weapons—think non-metallic bombs to be snuck aboard commercial airliners—to be used against U.S. targets. The U.S. made clear it believes it was preparing to strike.

The second wave of warplanes launching strikes looked like something out of the Smithsonian’s Air and Space Museum. An all-Air Force show, it featured the B-1 bomber, F-15 and F-16 fighter-bombers, and Predator drones. “Targets included [ISIS] headquarters, training camps, barracks and combat vehicles,” Mayville said.

But the real star of the second act was the Air Force’s F-22 fighter-bomber, making its combat debut. It has been a long time coming: The $350 million per-copy Raptor has been operational since 2005, and Air Force officials have been steaming ever since as Pentagon officials kept it on the sidelines.

“This second picture shows an [ISIS] command and control building in Raqqa that was targeted by U.S. Air Force F-22s during the second wave of strikes,” Mayville said. “This strike was the first time the F-22 was used in a combat role.” Mayville detailed its role. “The flight of the F-22s delivered GPS-guided munitions—precision munitions—targeting, again, only the right side of the building…You can see that the command and control center, where it was located in the building, was destroyed.”

The final act, like the first, was all Navy. F-18 attack planes from the carrier USS George H.W. Bush carried it out. Mayville focused on an ISIS training and logistics site. “The aircraft targeted locations within the boundaries, within the fence line of the residence,” he said. “You’ll note that the effects of the strike were contained within the boundaries of the target area.”

Mayville noted that 96% of the weapons used were precision-guided. But he couldn’t—or wouldn’t—say what percentage of the weapons had been dropped by U.S. allies, instead of the Americans. Bahrain, Jordan, Saudi Arabia and the United Arab Emirates all fired bombs or missiles from aircraft, “with Qatar in a supporting role,” in the words of Rear Admiral John Kirby, the Pentagon spokesman. In other words, Qatar didn’t attack anything. 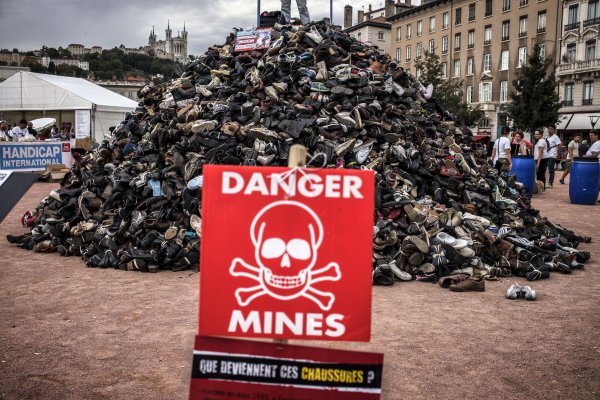 U.S. Pledges to Destroy All Landmines Outside of Korean Peninsula
Next Up: Editor's Pick