Depression is a tricky disease to treat, in part because it manifests so differently in those it afflicts. But promising new research shows there may be options outside the pill bottle and off the couch at a therapist’s office. That’s not to say you should stop taking prescribed antidepressants or break up with your therapist, but if you’d like to consider alternative treatments, read on.

TMS
A recent study on a kind of therapy called transcranial magnetic stimulation (TMS), which uses magnetic pulses to alleviate depression, showed that after a year of treatment, 68% of adult patients had improved depression symptoms and 45% had complete remission. Currently, TMS is used among patients who do not respond well to antidepressants, but some experts think the therapy could one day be used as a first-line treatment. In TMS, a large magnet is placed on the left side of a patient’s head, and magnetic pulses stimulate the under-active areas of the patient’s brain that are involved in mood regulation. The patient is awake the entire time, and there are few reported side effects aside from headaches in some. Other research published in August showed TMS could also have positive benefits for memory.

Acupuncture
Acupuncture is becoming an increasingly mainstream way in the U.S. to treat a wide variety of ailments from chronic pain to anxiety. The research to support its use for mental health disorders is still mounting in the West, but it’s thought that by inserting needles into parts of the body to manipulate energy can reduce tension. The National Center for Complementary and Alternative Medicine (NCCAM) notes that it’s still unknown whether acupuncture’s effects as a therapy are placebo.

Interpersonal therapy
Interpersonal therapy focuses on patients’ relationships with other people and how an individual may be struggling with connections and communication. It’s commonly recommended for young people, and is typically viewed as a short-term depression treatment. It’s also thought to be helpful for when marriage problems arise. According to the National Health Service (NHS) in the U.K., some research has suggested it could be as effective as antidepressants in certain cases, though more research is needed. Some studies show it can work as a first-line treatment, and it’s usually given in 12- to 16 one-hour weekly sessions.

Exercise
Scientists are increasingly showing that exercise improves mental health. For instance, Jasper Smits a psychologist with a clinic in Dallas has long recommended that therapists use exercise therapy for people who are not responding to other forms of treatments. In 2012, a clinical trial of heart failure patients found that regular exercise help alleviate depressive symptoms. It’s believed that exercise increases hormones like serotonin and dopamine in the brain, subsequently making people feel better.

Exposure therapy
For depression symptoms that may be related to other mental health issues like phobias and obsessive compulsive disorder, exposure therapy can help patients become more accustomed to and comfortable with things that used to bring them fear and anxiety. For example, if someone is afraid of flying, they my build up to taking an actual trip on a plane by starting with simply looking at images of airplanes. Johns Hopkins researchers report that it’s typically very successful if people can find the right therapist they can trust.

Mindfulness
Plenty of research supports meditation as a possible treatment for depression and anxiety. The mechanism is not entirely understood, but if a person can be acutely aware of what is happening in the present moment, the thought it is that they can relax and gain more focus. As TIME reported in January, many many cognitive therapists have started recommending it for patients as a way to deal with their anxiety and depression since it can mitigate stress.

Eye Movement Desensitization Reprocessing (EMDR)
According to the Anxiety and Depression Association of America, eye movement desensitization and reprocessing, or EMDR, “seems to have a direct effect on the way that the brain processes information… It helps a person see disturbing material in a less distressing way.” It’s still considered a fairly new type of therapy. As a patient goes through an unpleasant memory, they may watch moving lights, listen to tones and feel taps on their palm. It’s primarily used to treat PTSD, and still needs a lot more efficacy evidence. EMDR has had it’s share of controversy among researchers who question whether it really works.

Electric shock treatment
Also known as electroconvulsive therapy (ECT), shock treatment is fairly common treatment in which electric currents are passed through the brain and trigger seizures. It’s believed that the shocks interfere with brain chemistry that might be out of wack. ECT is considered much safer today than it was in the past–which too high doses were given resulting in negative side effects like memory loss and physical injury.

Cognitive behavioral therapy (including online and over the phone)
People are likely familiar with cognitive behavioral therapy, which is a talk therapy usually recommend for patients with moderate to severe depression. The idea behind cognitive behavioral therapy is to help patients understand the events or emotions behind their current status, and figure out ways to mitigate how they’re feeling day-to-day. Some recent research has suggested that cognitive therapy can work even if it’s not necessarily done face to face. In 2012, a study compared face-to-face therapy to therapy done over the phone and found that phone therapy was just as effective, and patients were more likely to stick with it. Some therapists will even do sessions via video chat, like Skype. 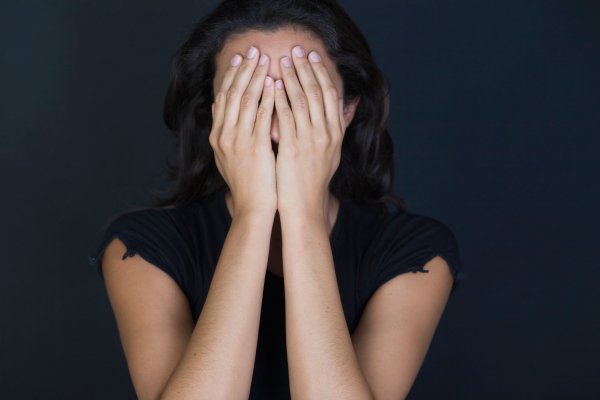 70% Of Violent Crime Victims Suffer After Incident
Next Up: Editor's Pick