President Nicolás Maduro talks during a meeting with ministers at Miraflores Palace in Caracas, Sept. 3, 2014.
Reuters
By Girish Gupta / Caracas

“Our Chávez who art in heaven, the earth, the sea and we delegates,” began María Estrella Uribe, a red-clad supporter of Hugo Chávez at the lectern of a Socialist party convention in Caracas earlier this month.“Hallowed be thy name… Lead us not into the temptation of capitalism, deliver us from evil and oligarchy.”

The latter part of the prayer to the former Venezuelan President was answered just a few days later, when Rafael Ramírez, the country’s oil minister minister and vice president responsible for the economy, was sidelined. A longtime lieutenant of Chávez, Ramírez had lately begun pushing to overhaul the struggling Venezuelan economy. In June, on his way back from an Opec meeting in Vienna, he took a detour to London to meet investors. His aim? To re-establish “communication with financial markets.” He wanted to refinance the country’s debt by tapping the international markets and talked publicly about raising the price of heavily-subsidized gas (the government loses out on some $12.5 billion a year to ensure that Venezuelans pay no more than a couple of cents per liter at the pump).

But he was pushed aside by Chávez’s successor, Nicolás Maduro, who, ever since he won a Presidential election last April, has struggled to get a grip on spiraling inflation and shortages of basic goods such as flour and shampoo. The crisis has knocked Maduro’s popularity—his approval ratings languish in the mid-thirties—and even fanned speculation in some quarters about the possibility of a default (the government insists it will honor its obligations down to last dollar).

Maduro announced Ramírez’s departure from the oil portfolio on Sept. 2, moving him to the foreign ministry in a televised speech billed as the great sacudón or shake-up. “We must begin a new stage in the revolution,” Maduro said, naming Chávez’s cousin, Asdrúbal, as the country’s new oil chief. Rodolfo Marco Torres, who participated in Hugo Chávez’s failed 1992 coup attempt against the then government of President Carlos Andrés Pérez, took over as the new vice president for the economy. Ramírez also lost his post as the head of the national oil company.

The reshuffle signaled another lurch to the left for Maduro as the souring economy takes its toll on ordinary Venezuelans. Ramírez’s move out of oil ministry also underscored the President’s main challenge—maintaining the support of the thousands of Venezuelans who backed Chávez. The opposition—divided as it is between a radical flank led by the still-imprisoned Leopoldo López and a more moderate faction spearheaded Henrique Capriles—poses little threat, at least for now. February saw the biggest anti-government protests in Venezuela in over a decade as students took to the streets. But the momentum behind that movement has waned. “The students have other priorities,” says Carlos Romero, a Venezuelan political analyst, “to finish their studies, to look for a job or to go abroad.”

Maduro’s real problem is keeping the left united behind his leadership, a challenge that is apparent in the Caracas slum of 23 de Enero—a well known bastion of the left and the place where Chávez and his co-conspirators planned the 1992 coup attempt. “Things are going from bad to worse,” says Winifer López, 20, a nurse who lives in the slum. “I always supported Chávez. He was wonderful for this country. But what on earth made him leave Maduro in charge?”

For Romero, the government reshuffle is a signal that “Maduro believes that a radical path would mean he will have more support from Chavistas [supporters of the late leader].”

“He does not like to be seen as a reformist, rather as a true believer of socialist ideas, of the legacy of Chávez,” Romero adds. “In order to maintain his popularity he has to be more radical to project him as a strong leader. That is why he moved Ramírez.” 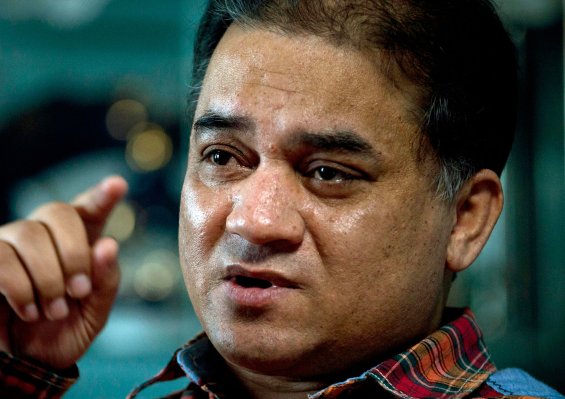